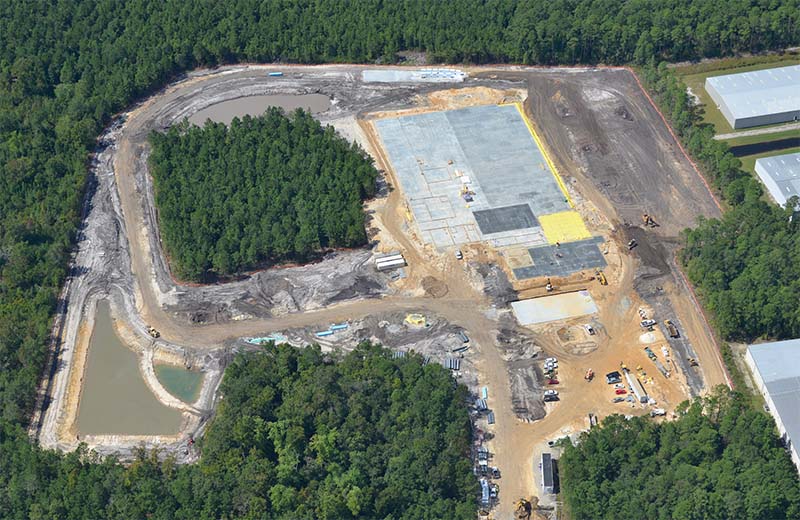 With an end goal of May 2023, Adams Beverages officials hope to move out of the company’s space off North 23rd Street in Wilmington by this summer.

In the new facility, distribution employees will have plenty of room, compared to the tight quarters in the nearly 70,000-square-foot building near downtown, which was built in 1972, according to property records.

Adams Beverages has partnered with ARCO Beverage Group on the Leland build, the third recent project the companies have embarked on in North Carolina. The pair just finished an expansion project in Charlotte and before then, renovated a facility in Pollocksville.

Population growth in the Carolinas, especially around Wilmington and Charlotte, prompted the company to expand, according to Bobbitt. “Until we've expanded, our employees have had to work extra hard because they're working in smaller facilities,” he said.

In addition to population increase, distributors have also picked up new brands, including hard seltzers, craft beer, non-alcoholic options and better-for-you beverages, Bobbitt said. “Every year it seems like there's something new that comes along from your suppliers, and then you pick up some new suppliers as well,” he said.

Last June, Adams Beverages sold its North 23rd Street facility to CIL Wilmington LLC for $5.5 million, according to property records. The company purchased the building from R.A. Jeffreys for $5.8 million in 2019. In March, Adams purchased land in the Leland Innovation Park, picking up about 24 acres for $1.2 million, according to property records.

Bobbitt said the company had no room to expand its footprint at the North 23rd Street location, which prompted officials to look on the outskirts of town. “There's not a lot of dry sites in and around the Wilmington area, so we found this one and, glad we did because it's just central; it’s real strategic for us, with the loop that goes right around it,” he said, referencing the surrounding transportation network.

Mark Turney, vice president of ARCO Beverage Group, said Leland officials were great to work with while the company navigated the permitting process. The property also includes land set aside for a future expansion Adams may choose to pursue later on.

Though town-spurred efforts to rebrand the park through a nonprofit faltered in recent years, the Adams’ build marks the first major construction project in the newly annexed territory. Before 2018, the entire industrial park was located in unincorporated Brunswick County.

Gary Vidmar, Leland’s economic and community development director, said he hopes the project spurs more activity in the area. “We hope with this announcement other businesses will realize the many advantages offered by the Park, which the Town has been touting since 2018, when the Town’s Economic Development Committee began taking steps to help rebrand what was formerly known as Leland Industrial Park,” Vidmar wrote in an email.

The Leland location will provide Adams with a strategic advantage, Bobbitt said. “That 15 minutes gets us a little bit closer to the major highways and state highways and roads,” he said. “So you're knocking off 15 minutes on the front end and 15 minutes on the back end for some of these trucks that are getting away from your facility going out to the market and coming back.”

From the Wilmington facility, Adams services an eight-to-10-county region, from Onslow to Brunswick to portions of Robeson and Scotland counties. It has an exclusive distribution agreement with Anheuser-Busch, which means anytime customers see a Bud Light on the shelf – Adams Beverages made sure it landed there. “Anywhere you see this product in our territory, we've bought it warehoused it, go out and sell it, put it on delivery trucks and take it into those accounts,” Bobbitt said.

The company also works with other brands, including Constellations Brands (Corona, Pacifico), SweetWater Brewing Company and more. Though Adams hasn’t yet partnered with any local Wilmington breweries, Bobbitt said it’s a possibility in the future.

Crews are constructing the Leland facility using tilt-up concrete, Turney said, and land clearing and grading are already complete. Turney said the state-of-the-art building is being constructed with employee comfort and safety as top priorities.

For now, Adams has been sharing space at the North 23rd Street location with a new tenant, Frontier Scientific Solutions, as the beverage distributor prepares to move out next year.

“Over the course of a weekend we'll pretty much move that inventory from 23rd Street into the Leland facility,” Bobbitt said.