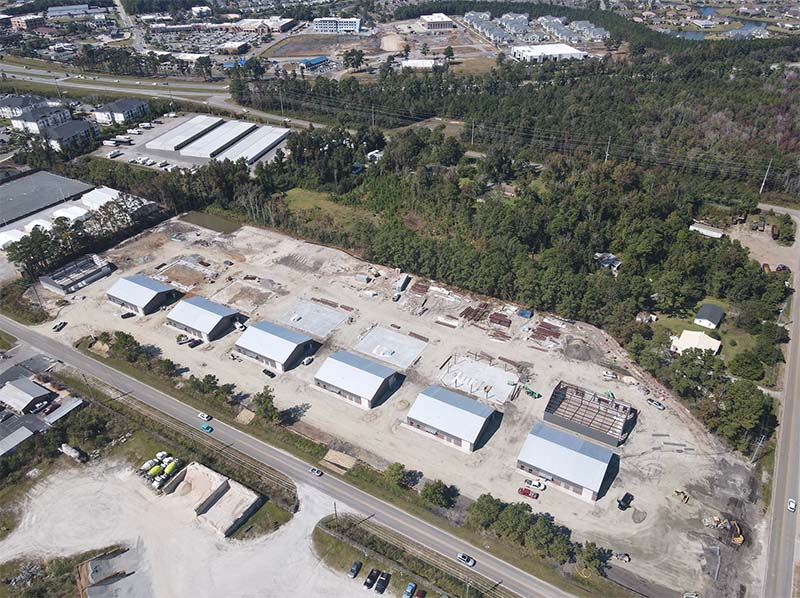 Phase one of the Ploof Road Business Park, planned to hold 19 standalone buildings, is nearly complete. (Courtesy of Creative Commercial Properties)
A new business park is under construction in Leland, with four tenants already solidified.

Plans call for 19 buildings to be built at the park in three phases, Nadeau said. Fronting Ploof Road, the first six buildings will be completed within a month. “We’re right down to the finishing touches,” he said.

The next seven buildings have been framed – some with roofing already completed – and are slated to be completed early next year. By late 2023, the final six buildings will be completed, Nadeau said.

Each of the buildings in the park, developed by Nathan Sanders, is 5,000 square feet with private fenced laydown yards.

Built in a flexible industrial zone outside of town limits, the park was designed to accommodate “just about any small business,” Nadeau said. “Initially, we figured we're going to have a plumber next to an electrician next to a homebuilder next to a [general contractor] and so on,” he said, but instead, the development attracted “a much more unique set of users.”

Both the gym and brewery intend to accommodate customers on-site, Nadeau said. Mannkind Brewing Co. will move into the development’s second phase, he said.

The standalone building concept attracts small businesses because most industrial new construction in the area begins with a minimum of 10,000 or 20,000 square feet, according to Nadeau. Only a strip center offers comparable sizing, he said.

“That's certainly unique to have a footprint of 5,000 square feet where you could have your own building, your own yard, and your own parking spaces,” he said. “Basically, there's nothing else in Leland that offers 5,000 square foot standalone space.”