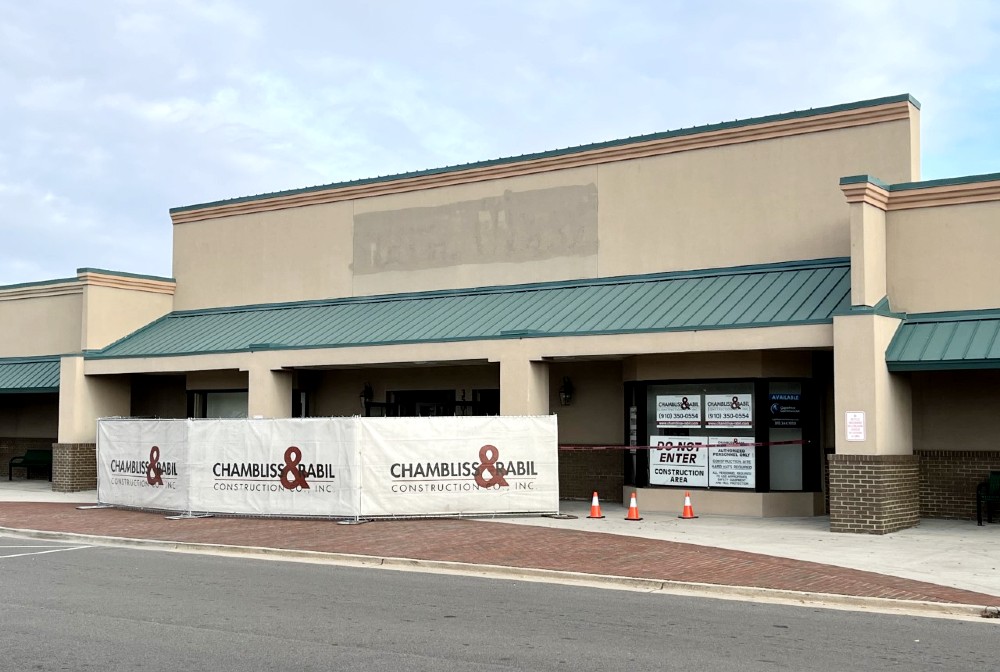 Homesense, a national retailer and discount concept from the same company that owns TJ Maxx, is coming to the former Stein Mart space, 3501 Oleander Drive, at Hanover Center in WIlmington. (Photo by Cece Nunn)

As a new apartment community rises behind Hanover Center, national tenants are preparing to fill some vacant spaces in Wilmington’s first suburban shopping center, built in 1955.

The largest new kid on the Hanover Center blocks will be Homesense, coming to 24,000 square feet in the former home of Stein Mart at 3501 Oleander Drive, which closed in 2020 after the clothing retailer declared bankruptcy.

Homesense is the newest discount concept from TJX Companies (umbrella of TJ Maxx, Marshalls, HomeGoods and more) and is described by the company as “an off-price retailer of apparel and home fashions in the U.S. and worldwide.”

A November news release on the opening of a Homesense location in another state said the store “features a wide array of furniture, a rug emporium, a wall art and mirror gallery, an extensive lighting department that includes hanging chandeliers and a work-from-home section … Customers can also shop for seasonal items, including holiday decor and entertaining essentials, all at prices 20-50% less than full-price retailers, including department and specialty stores.”

The remaining 13,000 square feet previously occupied by Stein Mart will be leased to one or more tenants, said Randy Kelley of Wrightsville Beach-based Harbour Real Estate Partners, one of the owners of the Hanover Center in a joint venture with ShopCore.

ShopCore is part of New York-based The Blackstone Group.

Location is one of the biggest selling points for Hanover Center, Kelley said.

“A lot of regional and national tenants follow retail gravity, traffic count and proximity to neighborhoods. You also have the redeveloped mall across the street and increasing traffic along Independence Boulevard. The corner of Oleander and Independence Boulevard is one of the most well-traveled intersections in Wilmington,” he said. “Retailers love leasing in shopping centers that have history and great co-tenancy.”

He said Pedego and Stretch Zone are expected to be open in the next few months, while Homesense could be welcoming customers by fall 2023. General contractor Chambliss & Rabil has been working on the upfit for Homesense.

Meanwhile, framing is underway at The Flats at Hanover, a 262-unit luxury apartment community, expected to be delivered by the fourth quarter of next year, Kelley said.

At Mayfaire, former restaurant to be razed to build Westin brand hotel