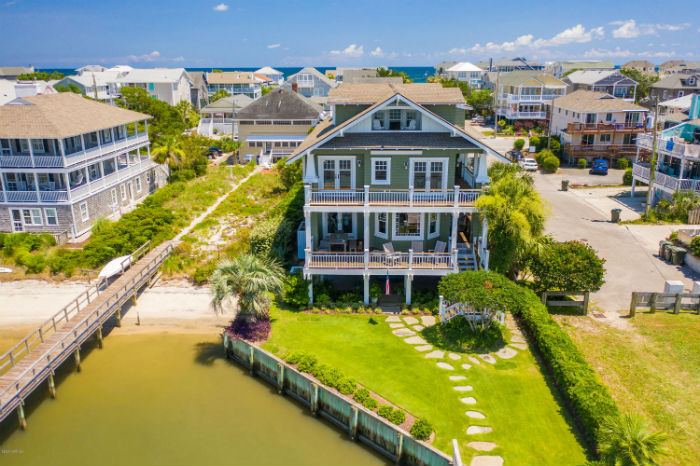 The home at 6 W. Atlanta St. in Wrightsville Beach was listed for seven days before an offer for it was accepted. (Photo courtesy of Intracoastal Realty Corp.)
Luxury home sales in the Wilmington area broke records again in October, including in the number of high-end homes sold, total dollar volume and highest number of super luxury homes, according to a report released Thursday.

A major record was also broken early in October. The sale of 142 Beach Road South on Figure Eight Island for $5.5 million represented the highest sale ever recorded in the N.C. Regional Multiple Listing Service (MLS).

Another 44 homes went under contract in October. Luxury homes are defined as those costing $1 million or more.

"Just as eye-popping were the number of sales of super luxury homes.   The $3 million dollar price tag has been a local unofficial dividing line that separates the upper crust of high-end homes from 'regular' luxury homes," the report stated. "In October, seven properties sold with price tags of $3 million or more in the tri-county area of New Hanover (6), Brunswick (1) and Pender (0) counties.

"That breaks a record set in August 2017 when five such homes sold."

“One of the most significant changes we’ve seen in the luxury market this year is the speed with which buyers are acting,” said Kathleen Baylies broker in charge at Just for Buyers Realty, in the release. “In the past, when a $3 million plus home went up for sale, you could expect it to sit for a while - sometimes years.

The report gives an example: The six bedroom, six-and-a-half bathroom home at 6 West Atlanta St. in Wrightsville Beach was listed for seven days before an offer was accepted.

"The property is situated one block from the ocean and measures just under 4,400 square feet. It was listed by Bobby Brandon of Intracoastal Realty Corp. and closed on October 12th for $3.5 million," the report stated.

With more than $2B in sales, Brunswick County real estate market sets record