More Than 900 Apartments In The Works In Leland 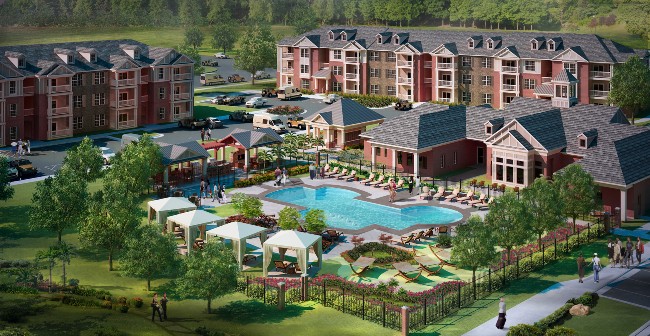 Either under construction or in various stages of development are more than 900 apartments in three complexes on Westgate Drive.

In addition to apartments, the 550-acre Westgate community includes retail and dining projects and single-family homes, as well as the 146-acre Westgate Nature Park.

Virginia-based development firm Kotarides recently closed on the purchase of nearly 23 acres, the site of an upcoming Kotarides’ apartment project, for $4.38 million in Westgate, according to an announcement by Capstone Land Sales.

Kotarides expects to break ground in 2023 on the more than 360-unit luxury apartment community, the Capstone news release stated.

Belmont at Westgate has received preliminary zoning approval, and the town of Leland is awaiting building permit applications, said Ben Andrea, the town’s director of planning and inspections.

Other apartment complexes in the works are the 248-unit Waterleaf at Leland, which is nearing completion; and the 312-unit Exchange at Westgate, for which permits are under review. Both are on Westgate Drive.

“We have been contacted or made aware of some other potential apartment community developments but have not received any formal submissions at this time,” Andrea said in an email Monday.

Charles Einwick, director of finance for Kotarides, called the population growth the Leland area has seen “impressive” and said the company has been increasingly active in North Carolina.

According to the Capstone release, the Westgate apartment community will be Kotarides’ first apartment project in the Wilmington area, but the firm has several other communities in Raleigh and Charlotte.

The Capstone brokerage team in the Kotarides deal was led by Caleb Troop and Eric Liebich.

“The opportunities for developable, entitled multi-family land in the Wilmington MSA are slim to none,” Troop said in the Capstone release. “That scarcity, paired with an incredible location next to robust retail and commercial services with immediate access to the entire Wilmington market, makes this an incredibly attractive site.”