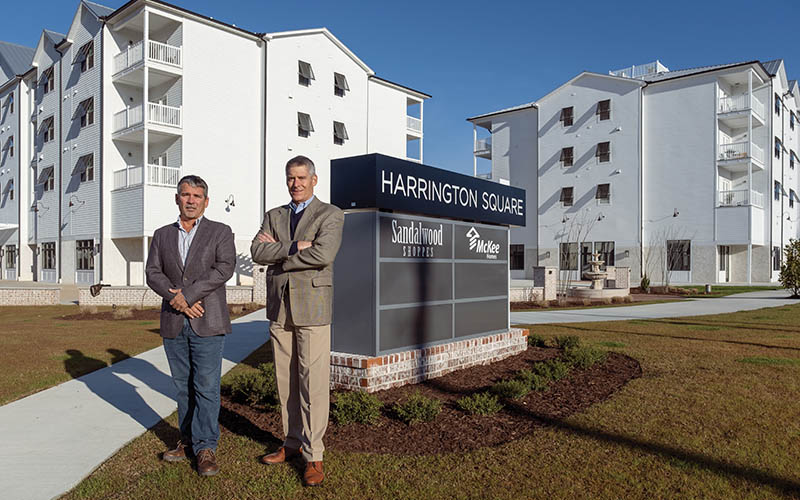 A photo from last year shows D. Logan, one of the developers of the Harrington Village apartment project, and Gary Vidmar, the town of Leland's economic and community development director, at Harrington Village in Leland. (File photo)
A California-based investment firm recently paid $67.5 million for an apartment community in Leland, according to a Brunswick County deed.

Latitude Management Real Estate Holdings of Beverly Hills bought the complex, which includes 333 one- and two-bedroom units and more than 9,000 square feet of commercial space in its main building, from Harrington Village Development Group.

“We were super-excited to find a great buyer, and it's a great time to sell properties like that,” said Pat McKee, one of the partners in the development group, who is also owner of Fayetteville-based McKee Homes. “It really speaks to the value of the project and the area because it was a great price for us as the seller.”

McKee said the deal also shows the value that investors around the country see in Leland.

“Latitude has immense experience working in this region, having a total of 1,867 multi-housing units in a portfolio consisting of over 10 properties throughout North Carolina, South Carolina and Georgia, as well as nearly 4,000 units of multi-housing product nationally,” the release stated.

Efforts to reach a representative of Latitude were not immediately successful Monday.

At Harrington Village, 4276 Harrington Road off Village Road in Leland, more apartments are being added to the development.

As McKee said in a previous Greater Wilmington Business Journal story, because some of the commercial space didn't find any takers over a period of a few years, the developers decided residential space was a better use.

“At close, an additional plot of interior retail space will be permitted for the development of 16 additional residential units, with construction completion slated to finish by the end of 2021,” the JLL release stated. “In addition, the sponsor intends to allocate capital to add 12 more residential units to a vacant pad of entitled land that is adjacent to the subject property.”

426 apartments planned on 43 acres in Wilmington

The Muni: 'A Peach Of A Course'

Golf Magazine recently named the Wilmington Municipal Golf Course the best public course in North Carolina and No. 21 of the top 30 municipa...