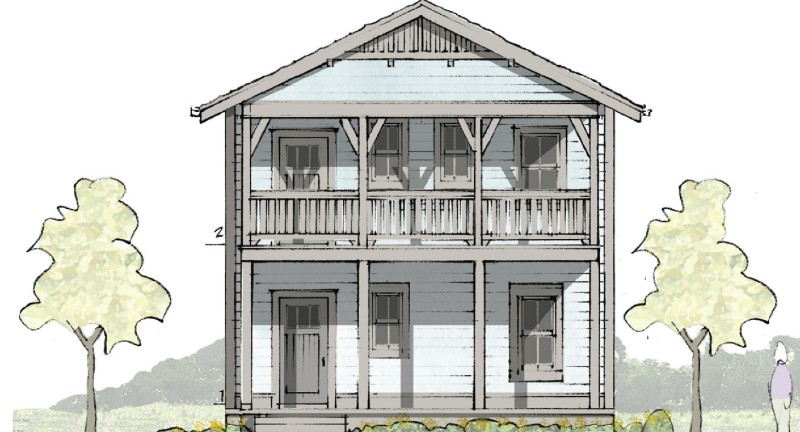 A three-bedroom cottage at The Cottages at Riverlights. (Rendering courtesy of Riverlights)
A rental home neighborhood is underway at Riverlights, the 1,400-acre master planned community on River Road in Wilmington.

The project, The Cottages at Riverlights, will hold 279 homes for rent and is a partnership between Riverlights and Birmingham-based Capstone Communities, a news release stated.

Construction on The Cottages at Riverlights began in early August with the first homes expected to be delivered in late 2022, according to the release.

The 21-acre neighborhood is the first project in a 120-acre mixed-use village at the southern entrance of Riverlights.

Nick Cassala, vice president of operations for Riverlights, said in the release that bringing the build-for-rent concept to Wilmington “fills an important niche for many in today’s real estate market, while adding to Riverlights’ diverse residential offerings. We anticipate The Cottages at Riverlights will be home to young professionals, buyers awaiting a home under construction, empty nesters and families looking for an independent home for relatives.”

In addition to featuring sidewalks, pocket parks and green spaces, The Cottages will offer a mix of one-, two- and three-bedroom cottages, each with a fenced yard, as well as studio lofts and two-story carriage units.

“The homes will range from 650 to 1,350 square feet and include 9- to 12-foot ceilings, quartz countertops, wood-grain flooring, in-unit washers and dryers, a smart home technology package, 24/7 on-call maintenance and optional enclosed garage parking,” the release stated.

Neighborhood amenities are expected to include courtyards with pavilions and grill stations, a clubhouse with a resort-style pool, a fitness center, a dog park and valet trash.

According to the release, Capstone has similar cottage-style developments on the way in Huntsville, Alabama; Daytona Beach, Florida; and at Nexton in Summerville, South Carolina, another Newland master-planned community.

“Since 2007, our team has developed cottages in more than 20 student housing communities across the country and have found this model to be highly successful,” said John Acken, executive vice president of Capstone Communities, in the release.

Capstone’s in-house construction entity, CBI Construction Services, is the general contractor for The Cottages at Riverlights, the release stated. Construction financing is being provided by Truist Bank and Nequette Architecture & Design, in Birmingham, is the lead architect for the project.

Capstone Properties, Capstone’s in-house management division, is expected to begin pre-leasing in the summer of 2022.

Rental homes are in high demand in the Wilmington area, and the build-for-rent concept is a growing trend.

Acken said in the release, “As we begin introducing the cottages to the multifamily sector, our goal is to meet the needs of Wilmington renters and build a true sense of community that is unlike a traditional apartment setting. Our team at Capstone sees great potential in the area and looks forward to contributing to Wilmington’s growing economy.”

Biggest apartment deal of the year so far: $79M transaction