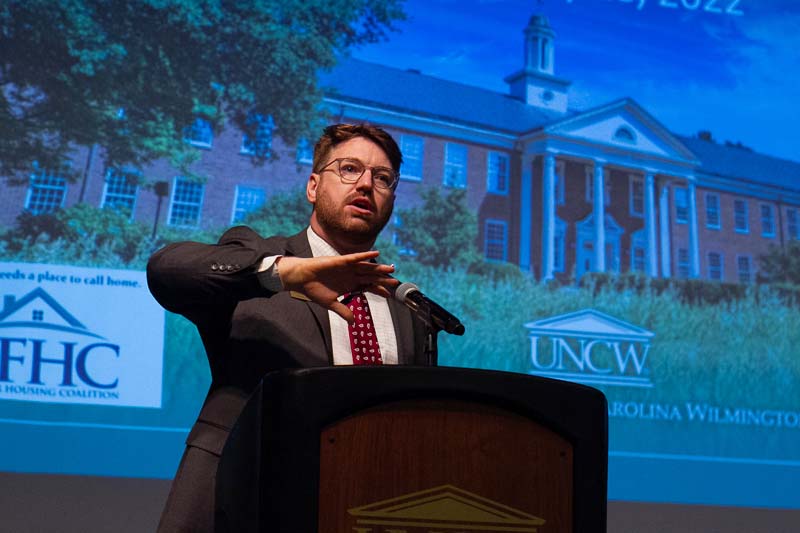 Stakeholders reviewed regional housing costs and wage data and later, panelists led a discussion focusing on what ought to be done to address the issue.

For years, public officials have met in task forces and committees to discuss the issue. Many community members have grown critical of the lengthy analysis phase and are urging both private and public actors for action rather than conversation. Friday, multiple speakers harkened to the “political will” required to address the problem.

“I would suggest that immediately, in 2022, we need to figure out: What is our commitment for at least $100 million behind this issue?” Knight said.

Last year, officials for the first time presented a plan for a potential housing bond. As initially proposed, the $50 million bond would have committed $20 million to develop more than 1,300 units, $25 million to preserve 200 existing units as affordable and $5 million to support existing housing programs.

The item was proposed to appear on November ballots this year, according to early conversations surrounding the bond. After two Wilmington Chamber of Commerce surveys provided to public officials confidentially revealed the item lacked support, officials backed off from the idea, according to reporting from WHQR. Wilmington and New Hanover County elected leaders will meet next week in a joint meeting to revisit the topic.

In a community survey commissioned by the city and county last year conducted by the University of North Carolina at Greensboro’s Center for Housing and Community Studies, 87% of respondents agreed affordable housing should be a top priority for their local government.

Housing bonds elsewhere – in Durham, Orange County, Charlotte and Greensboro – have all passed with public support, Samuel Gunter, executive director of the N.C. Housing Coalition told the audience. “We have not yet had a housing bond in this state that has failed, and none have passed with less than 64%,” he said.

New Hanover County Commissioner Deb Hays said she is not in favor of the proposed housing bond because she said she believes it will financially encumber those who it’s intended to help. “That to me is not part of the solution,” she said. “We can do so much better.”

More than half of all renters in New Hanover County are cost-burdened, meaning more than 30% of their income pays for housing, according to data presented by Chris Prentice of the University of North Carolina Wilmington’s Center for Social Impact.

“We have under-invested in this for two decades plus,” Brown said. “We have got to immediately set targets to quit going backwards with this problem immediately”