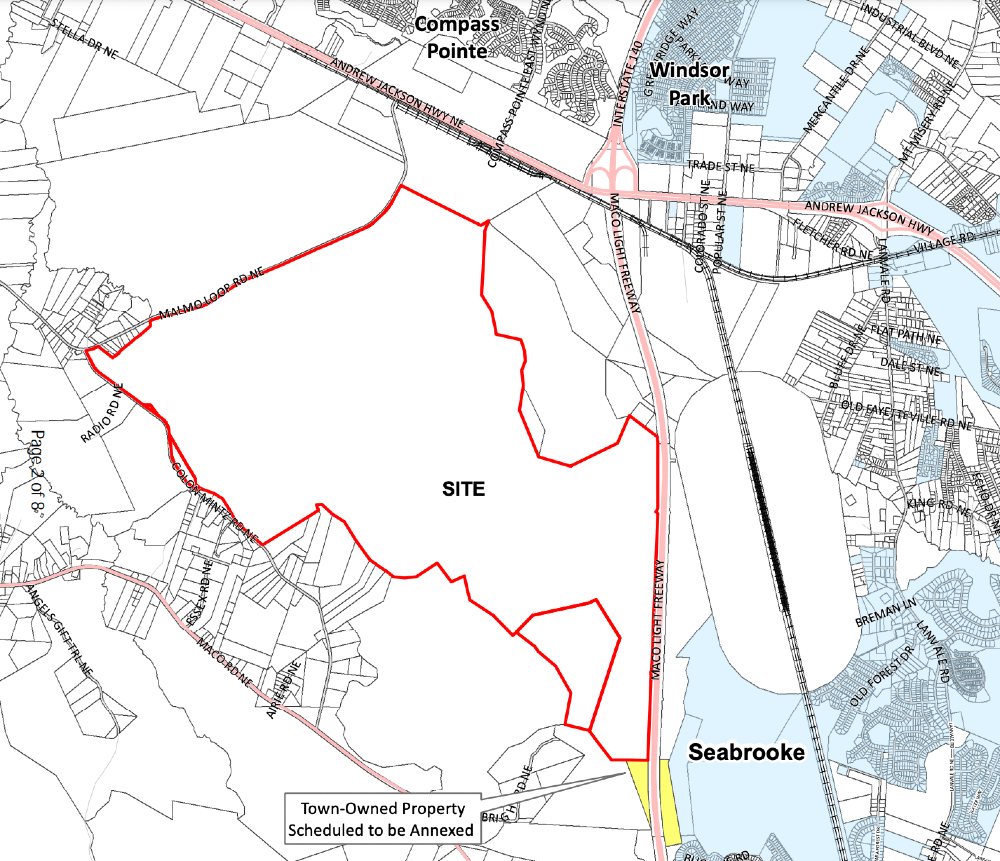 One of the largest sites the Leland Town Council will consider as part of its meeting at 6 p.m. encompasses nearly 2,120 acres adjacent to Interstate 140 and Malmo Loop Road NE.

In a proposed development referred to as East Lake, Alabama-based Criteria Development previously sought a planned development (PD) designation from Brunswick County for a project that could include nearly 4,000 single-family homes, 693 townhomes, 300 multi-family units and 23 acres of commercial space.

The Brunswick County Planning Board denied the East Lake PD measure Sept. 12, so the developers have turned to Leland, submitting an annexation and zoning petition to the town Sept. 30.

A resolution on Leland's Thursday evening agenda, if approved, directs the Leland town clerk to investigate a voluntary annexation request from Malmo Loop Farm LLC and Waccamaw Lumber Corp. for the 2,120 acres.

“The land is the same that comprised the project that went to the Brunswick County Planning Board in September,” confirmed Ben Andrea, director of planning and inspections for the town of Leland, in an email Thursday.

That doesn't mean the specifics of the proposal outlined for the county will remain the same.

“If annexed into Leland, the zoning applied to the property would need to align with the Leland 2045 plan, and any development would need to meet the Town’s Code of Ordinance requirements, which could result in something different than what was proposed to Brunswick County,” Andrea said.

The town staff has recommended that the council adopt the resolution.

At the county planning meeting in September, member Joy Easley made the motion to deny the East Lake PD “based on significant wetlands on the site and flooding in the area from historical data voiced by neighboring property owners, and the representative for the developer was unable to disclose the percentage of the site in the unstudied A flood zone, which could cause some base flood elevation issues with the layout of the project,” the minutes stated.

The motion received a unanimous vote.

Micah Jones, representative for Criteria Engineering and Criteria Development, told the county planning board the developers “are amenable to over-designing their stormwater system, and traffic will be addressed through the Traffic Impact Analysis and potential road improvements will have to be addressed as required by the North Carolina Department of Transportation (NCDOT),” according to the minutes.

At the meeting, Jones estimated that project could take about 15 years to finish, depending on market conditions. Efforts to reach Jones for updated information on Thursday were not immediately successful.

The proposed East Lake site, although the largest, is one of many on the Leland Town Council’s agenda Thursday.

Another resolution would officially extend Leland’s corporate limits by nearly 900 acres south of U.S. 74/76 along Malmo Loop Road, based on a request by Malmo Ventures. A developer wants to build 2,770 residential units, including 1,698 single-family, 495 apartments, 321 townhomes and 255 duplex units, according to agenda documents.

"The project is expected to be developed in multiple phases over a period of 12-15 years and is projected to include approximately 240,000 square feet of retail, office, and institutional space," the documents state.

Council members will also consider a development agreement and an initial zoning ordinance for the 900 acres Thursday.

"Development projects often occur in multiple phases over several years requiring a long-term commitment of both public and private resources. Such developments often create community impacts and opportunities that are difficult to accommodate within traditional zoning processes," the documents state. "Such projects involve substantial commitments of private capital, which developers are usually unwilling to risk without sufficient assurances that development standards will remain stable through the extended period of the development."

The same measures – a potential annexation, development agreement and initial zoning – are on the agenda for about 325 acres near the intersection of U.S. 17 South and Lanvale Road.

More information about Thursday's agenda is available on the town of Leland's website.

Brunswick County home sales down nearly 17% for the year