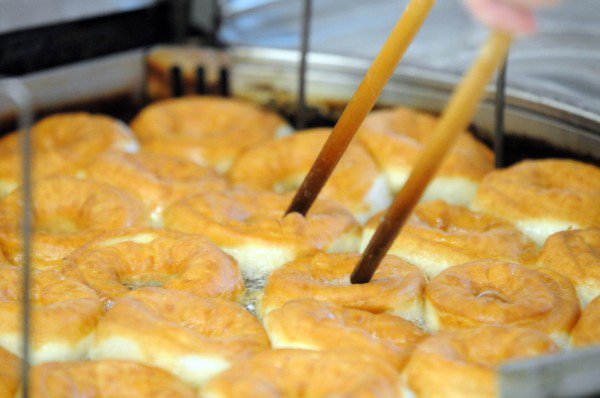 Britt's Donuts will open Easter weekend this year. (Photo courtesy of Britt's Donuts)
Britt’s Donuts of Carolina Beach will open for its 82nd season Easter weekend. It will be the 48th year of operation for owner Bobby Nivens, who was born in 1939, the same year the shop was founded by H.L. Britt.

This year, Nivens will welcome back managers Lynn Prusa and Dawn Johnson, both former employees of the town of Carolina Beach, along with several employees who have been with the company for a decade or more.

“This year we’ll have about 27 employees,” Bobby Nivens said. “Many of them have been with us for a long time and come back year after year. We’re like a big family.”

Britt’s got a late start to their season last year, opening for weekends only on May 10, before moving to a seven-day schedule Memorial Day weekend. Despite the pandemic, Nivens said once the shop opened, it was as busy as it is any given summer.

To prevent crowding last summer, Nivens removed the bar stools that line the small counter inside the donut shop and created one-way entry and exit points. He also marked the sidewalk to encourage distancing among those waiting in line. Nivens plans to keep the same measures in effect this summer.

“We’re really lucky that we’re able to be open and so we want to do everything we can to keep everyone safe,” Nivens said.

Nivens said when he’s at the shop he often likes to chat with those waiting in line. He said he’s met customers from all over the world and is often curious about why they’re willing to wait so long in line. He said it always strikes him as odd that they really don’t seem to mind.

“I waited in lines in the military and it’s something I just don’t do anymore,” Nivens said. “But I guess for some people it’s just part of the tradition of visiting Britt’s.”

Britt’s will be offering the same menu for the 2021 season that it has for years: homemade glazed donuts with milk, coffee and soda.

“All we have ever sold is the glazed donuts,” Nivens said. “But it really makes you feel good to have a business people love.”

Trolly Stop location on the market