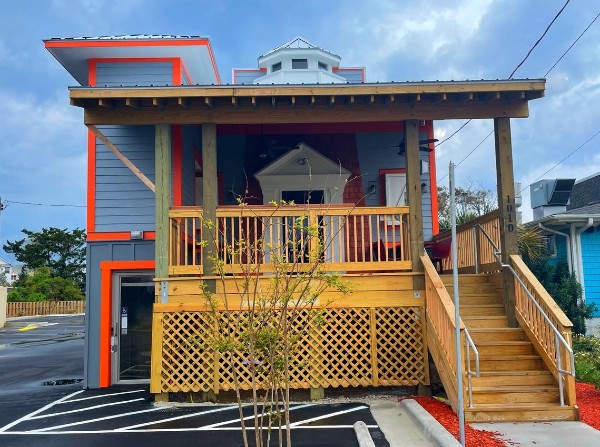 Vinny's Seafood Express opened recently in Carolina Beach. (Photo courtesy of Vinny's Seafood Express)
When Uncle Vinny’s Pizzeria Ristorante owner Vinny Doria was approached by his landlord asking if he would be interested in running a small seafood restaurant next door to his pizzeria, he agreed it was something Pleasure Island needed.

“Most of the seafood restaurants here are sit-down places,” Doria said. “We wanted to do something very casual, quick and easy where you walk up and get your food to take home or to the beach or enjoy a quick bite right here.”

While Vinny’s Seafood Express, 1010 S. Lake Park Blvd., is mainly designed for takeout, there are 28 seats available, some inside and some out.

The restaurant opened just before Memorial Day and Doria said the reaction so far has been very positive.

The initial menu included mostly fried items, but over the past weekend an updated menu was released with several lighter options including salads and grilled seafood. Doria said he will be utilizing locally sourced seafood as much as possible.

Originally from Brooklyn, Doria moved to the Triangle in his 20s and operated several restaurants over the years. When the opportunity to open a pizzeria in Carolina Beach presented itself 11 years ago, he relocated to the beach.

“This is very different from the other Italian concepts I’ve operated over the years, but I really think this is something the beach needed,” Doria said.

The menu at Uncle Vinny’s has stayed tried and true, he said, and he’s very grateful to have remained busy throughout the pandemic and keep the majority of his staff working.

“Pizza is pretty much a recession-proof food,” Doria said. “You can still feed a family for $20 with a pizza.”

Doria hopes to provide an affordable seafood option with Vinny’s Seafood Express. He believes the shape of the restaurant industry has changed for good and will continue to change going forward.

He doesn’t see takeout and delivery slowing down anytime soon, even though many people are eager to return to in-house dining.

“Sometimes takeout is an easier option for families and some people still prefer to stay at home,” Doria said. “Our business at Uncle Vinny’s used to be about 50% dine in, 50% takeout. Now it’s a steady three quarters takeout.”

Doria said he’s anticipating one of the busiest summers ever on Pleasure Island.

“Our industry is under a ton of pressure right now,” Doria said in response to the current labor shortages and increased public demand. “We hope customers will be understanding.”

Summer hours at Uncle Vinny’s Pizzeria Ristorante are 11 a.m. to 10 p.m. Monday through Saturday, and Sunday from noon to 9 p.m. Vinny’s Seafood Express is open from 11 a.m. to 9 p.m. seven days a week.