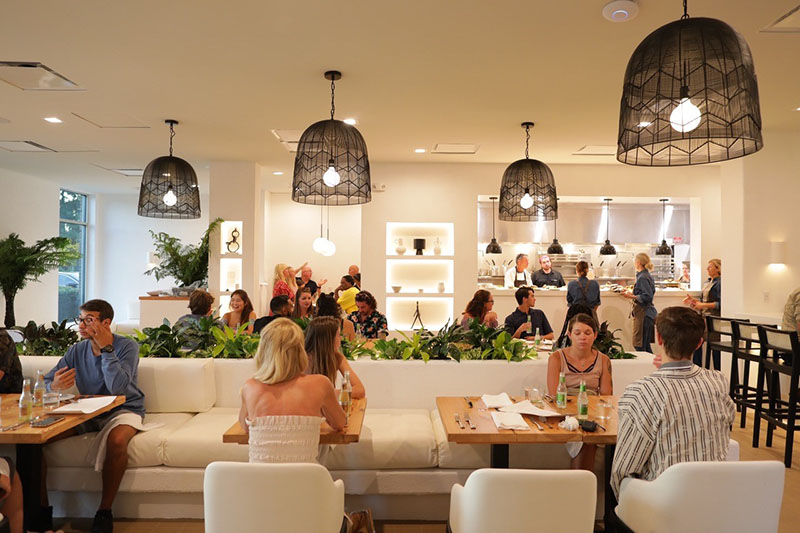 The Green House, which opened in July, now also has lunch hours. (Photo courtesy of The Greeen House)
The Green House’s all-vegan, all-gluten-free concept has been successful enough that, after two months, the restaurant is expanding to offer a lunch menu.

The lunch launch takes place Wednesday, according to Anastasia Worrell and Laura Tiblier, the venture’s principal-partners. They say the mid-day meal will be different from what dinner clientele have come to expect at this fine-dining restaurant.

“It has its own menu, developed by our executive chef Tosha Gutheridge and all our sous chefs, who have now worked together for two months,” Worrell said. “It’s fun for them, getting to show their strengths.”

Lunch offerings, which range from soup to dessert, can be eaten on-site or ordered to go.

“Our dinner menu can’t be ordered as take-out because the dishes do not travel well,” Tiblier said. “With lunch, we wanted to make sure it could be a to-go menu. And you don’t need to have a reservation to dine in.”

The lunch menu draws on such cooking cultures as those of Southeast Asia, Italy and the Southern U.S. It also features local farm fare and will change with the seasons as produce evolves seasonally, Worrell said.

“We’ve already changed to fall fare,” she continued. “Our dinner menu has had some additions because some specials were very popular.”

Wines served at the restaurant are natural and sustainable; cocktails are made with craft spirits. And beers on the menu are served in a can to prevent gluten contamination. The Green House bar – which is walk-in – also offers alcohol-free cocktails.

When planning their new restaurant, Tiblier and Worrell believed there was a market for a place that would serve only vegan and gluten-free cuisine.

“When you have dietary restrictions, you go into a restaurant and ask lots of questions [about what’s in each dish],” Tiblier said. “The feedback we’ve gotten is that people sit down at The Green House and they can relax.”

The partners also felt that since many fine dining restaurants in the area offer only limited vegan and gluten-free options, there was a hunger among their target audience for an upscale environment.

It is open Wednesday-Sunday. Information: 910-679-4994 or www.thegreenrestaurant.com