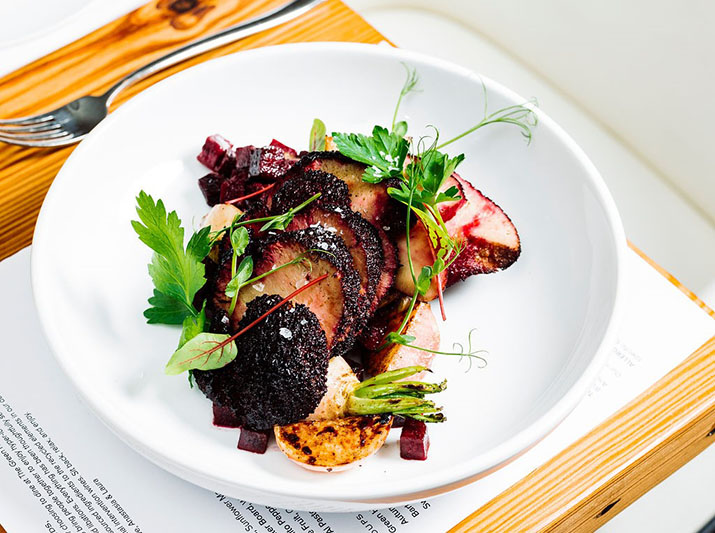 The Green House’s latest seasonal menu features many dishes with mushrooms, including this entree with lion’s mane mushrooms, hakurei turnips, ginger and a smoked beet jus. (Photo by Matt Ray Photography/Courtesy of The Green House Restaurant)
Cooler weather coupled with lingering humidity in the Wilmington area creates ideal conditions for mushroom cultivation. As more exotic varieties – lion’s mane, chicken of the woods and maitake among them – pop up at farmers markets and grocery stores, The Green House Restaurant chef de cuisine Parker Lewin shared some advice for those looking to up their game.

“The lion’s mane dish that we’re doing right now is probably the crown jewel of the menu. Everything points in that direction,” Lewin said.

Lewin’s preparation involves slow cooking the mushrooms, which have tasting notes he described as “almost briny” with a sweetness “like sherry,” in an oil infused with aromatics before dressing them in a plant-based sauce inspired by Japanese tare, a sweet, soy sauce-based condiment.

Like a painter building dimension with layers of paint, Lewin’s dish is dynamic with layers of flavor. Although The Green House does not try to create meat substitutes in its plant-based cuisine, the smoky and meaty profile of the finished product had one customer convinced the restaurant had served them meat.

Wholesome Greens, the restaurant’s mushroom supplier, also sells its products at local farmers markets. Lewin offered science-based tips for those who aren’t sure how to approach lion’s mane or other unfamiliar local varieties at home.

“A really important thing for people cooking mushrooms at home is understanding how they’re different from vegetables,” Lewin said. “Their cell walls don’t work the same way that vegetable cell walls do.”

This is what gives mushrooms their meaty texture, Lewin said, and because of that, they can stand up to preparation methods that utilize high heat.

Before firing up the grill or preheating the oven, Lewin cautioned home cooks to consider another feature of mushrooms: their high water content.

“As with most living things, they are mostly water. So my big recommendation for people that are cooking mushrooms at home, especially if they’re just going to pain roast them or if they’re going to roast them in the oven, is to not season them before they’re cooked,” Lewin said.

Lewin recommended a light coating of oil before cooking mushrooms. Adding salt and other spices before cooking will prevent the mushrooms from getting crispy and caramelized, he added, a common complaint for those who claim to not like them.

“Through osmosis, they’re going to draw water out,” he said of seasonings. “That’s going to cause the mushroom to steam and not get crispy, to not do what you want it to do.”

Lewin listed aromatics like shallots, garlic, scallions or ginger as safe bets for seasoning mushrooms, including what he called the “classic French” option of pairing black trumpet mushrooms with orange zest. Another tip is to think of local flavors of the season like red wine, chestnuts, celery root and cold weather squashes.

But ultimately, Lewin emphasized that home cooks should trust their ability to create a dish that works for their palate.

“It’s up to the person eating. You don’t have to do anything,” he said. “It’s not like you’re going to do it wrong as long as you have all the variables and you’re trying to think about it.”

Have a tip for Restaurant Roundup? Email us at [email protected].