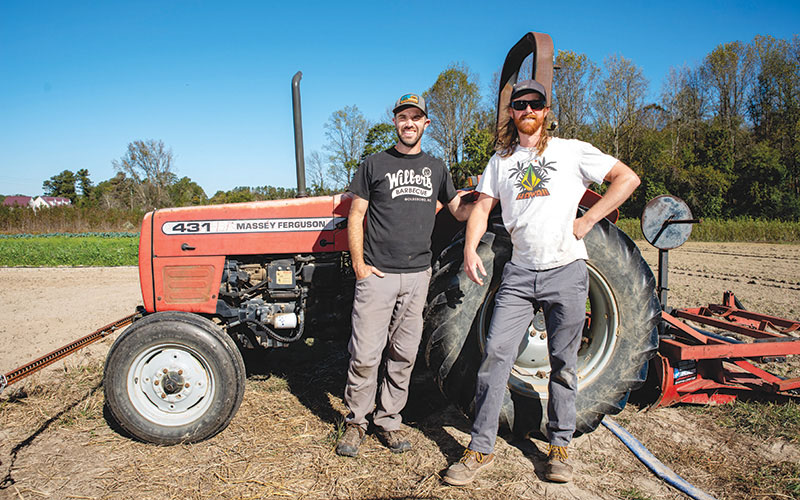 Milne directly supplies to a wide variety of local restaurants, including PinPoint, The Green House, Origins, Circa 1922, manna and Junction 421. He also supplies to others indirectly through Feast Down East.

In addition, Red Beard Farms sells to the public at the Wilmington Farmers Market each Saturday.

Milne, who owns Red Beard Farms with his wife, Katrin, got his degree in horticulture from N.C. State University.

“It all started when I took a permaculture class with Will Hooker that introduced me to local food and local food systems,” Morgan Milne said.

From there, he worked on a Community Supported Agriculture (CSA) farm in Raleigh, then went on to the Center for Environmental Farming Systems, a research facility in Goldsboro, which introduced him to “a bigger scale of farming,” he said. It also allowed him to get his first gig as a farm manager on an organic farm in Hyde County.

After that, Milne moved back to his hometown of Carolina Beach and worked at a restaurant for a couple of years before becoming a horticulture specialist for a local landscaping company. During that time, he built a relationship with the N.C. Cooperative Extension, which led him to a job on a farm that would pave the way for what he does now at Red Beard.

“I jumped in head first. I knew a lot, but you don’t know what you think you do,” Morgan Milne said.

Fast forward to 2014, where Morgan Milne spent the better part of the year moving the farm to the 17.5-acre farm he and Katrin own today.

Situated between Burgaw and Watha in Pender County, Red Beard Farms was “built from nothing,” according to Morgan Milne.

Morgan Milne said he had a rough start, with impacts from Hurricane Matthew and Hurricane Florence.

“We thought we were getting ahead and got hit way back, but I was determined,” he said.

Now the Milnes are past recovery mode and building for the future with the variable weather in mind. A well has been drilled to ensure consistent water for the crops and a greenhouse built to increase the number of plants grown.

“2018 was already the wettest year on record, then Hurricane Florence came through. That was only to be followed by arguably the driest year in 2019,” Morgan Milne said. “After 2019, all of a sudden, the weather patterns have changed. There is no such thing as April showers bring May flowers anymore.”

The variable weather forced Morgan Milne to make changes on the farm that would prove to sustain crop production for the long term.

“The well has been the biggest game changer, and the greenhouse has allowed us to go from 5,000-6,000 plants to 50,000-60,000. In the past two years, we have run out of space to plant,” he said. “We changed production systems from rows to beds and increased production 30-50%. It was a necessary step for us to continue to grow, literally and figuratively.”

Red Beard’s co-farm manager, John Gurganus, has taken over crop planting and production, and Morgan Milne has taken over as owner and operator doing harvest and sales and “just about everything.”

The variety of produce allows restaurants to keep their menus varied and interesting while providing customers with fresh, quality ingredients.

“It is the freshest they can get. The shelf life is triple than any other retailer, if not quadruple. They figure just to pay local guys a little more is better than throwing away half of what the other guy provides, oftentimes saving money,” Morgan Milne said. “Keep money in the community; they pay me and then I spend money there eating. It is a win-win at the end of the day.”

Jonathan O’Donnell, owner of Junction 421, a comfort food restaurant in Monkey Junction, agrees the quality of the food is far superior from local farms such as Red Beard, and he has many reasons why he chooses local produce.

“The first reason is the produce is superior; it’s the best. It is exceptional and we like to deal with quality food, and the second reason is [Milne] is a great guy, and the love and care he puts into it is reflected in the taste,” O’Donnell said.

The third reason O’Donnell gave for using a farm like Red Beard’s is the desire to keep business within the community.

“It is a matter of pride,” O’Donnell said.

The emphasis on the importance of eating local food has taken center stage in recent years with supply chain issues being at the forefront for consumers.

“COVID obviously wasn’t a good thing for everybody, but it was a good thing for local food,” Morgan Milne said. “There was a renewed focus on local food and it ties in with us starting our own farmers market and being available to the public.”

He is one of the founding members of the Wilmington Farmers Market, which is a producers-only market held Saturdays at Tidal Creek.

Whether it be providing produce to local consumers or chefs, Morgan Milne said he is dedicated to growing the scope of his farm to build a healthy network of local foods within the Wilmington area.

“I want to help Wilmington to become a food hub like Charleston, to increase awareness of local foods and why it is better,” he said. “Without us building this local food scene, they would have to rely on bigger farms around the country. The quality would be mediocre at best. The more support we get, the more we’re going to grow and create a thriving food system.”