Sorrow Drowner Reopens With Renewed Focus On Food And Drink 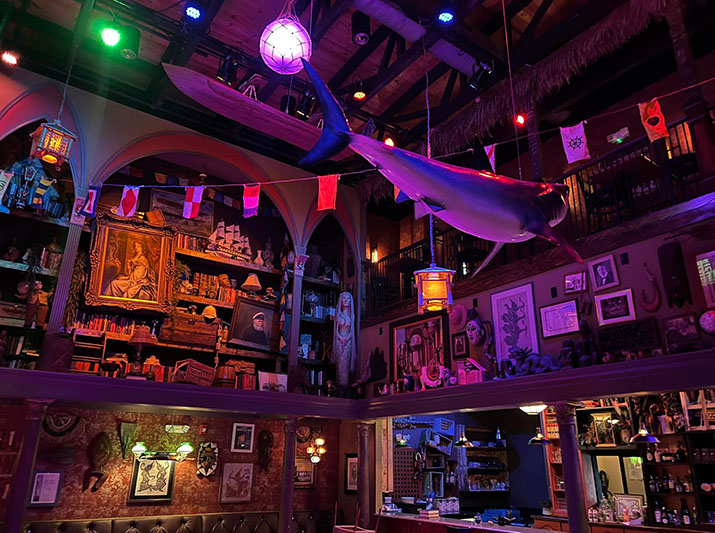 Owner Alfred Wheatley cited a string of issues in those early months, punctuated by a refrigerator that “literally exploded” during a week when the business was empty with multiple staff out sick with COVID. Supply chain issues prevented the business from reopening for more than eight weeks, time that Wheatley said he used to regroup and retool for an improved second opening in September.

One change is a pared-back events calendar. Before the hiatus this summer, The Sorrow Drowner hosted variety shows every Friday and Saturday evening, but Wheatley said it was difficult to book acts that fit the business’s old-timey vaudeville concept. Furthermore, Wheatley said the show started to detract from what was originally intended to be the main event: the drinks and food.

“We were supposed to be a tiki bar that had a show, not a dinner theater. It felt like people only wanted to come for the show,” Wheatley said.

To that tune, Wheatley hired chef Al Devane, and the two are working to hone the menu.

“This new chef is passionate about creating dishes and evolving our menu,” Wheatley said.

With new culinary talent on board, Wheatley said the kitchen is tweaking dishes by intentionally sourcing ingredients and offering more housemade elements. For example, the restaurant’s pupu platter still includes customer favorites like crab rangoon and spring rolls, as well as the Hong Kong-style bao buns stuffed with pork. But the huli huli chicken skewers now feature local chicken basted in sweet, tangy huli huli sauce, and the crab rangoons are made in-house.

Wheatley and Devane are also working on a family-style brunch, which Wheatley hopes to roll out in December.

At the bar, seasonal cocktails have joined more than 25 craft cocktails on The Sorrow Drowner’s menu. The current seasonal offering is the Sorrow Harvester’s Grog, crafted with End of Days’ Port of Entry Rum and Barrel Rested Rum plus local apple cider, blood orange juice and blood orange syrup.

Wheatley is working to build the calendar of events over time to supplement the monthly variety shows. One option is screening old movies; Indiana Jones and Allan Quatermain films were mentioned as examples of the kind of films Wheatley envisions fitting with the theme of the business. Another option is world history trivia.

Have a tip for Restaurant Roundup? Email us at [email protected].