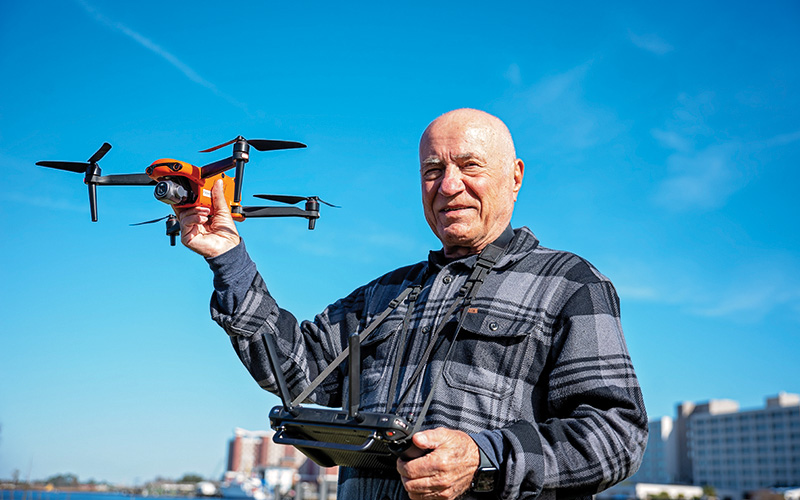 After area resident Christopher Pilloton retired from jobs in IT consulting, he started his own business, mainly offering drone photography. Retirees are going to work again for a variety of reasons, including boredom (photo by Michael Cline Spencer)
Many Cape Fear area retirees might initially opt for a life of leisure but discover that they still have a lot to give, and perhaps a lot to learn. Some turn to volunteering, but others draw on their interests or expertise to start a business.

Christopher Pilloton is one of them. After leaving his IT consulting position in 2008 due to a mass layoff, he was hired on a contract basis by his former boss, who had joined another company. After a brief retirement in 2014, he came back at his boss’s request, working full time and traveling to see clients until 2019, when he took what he terms a “hard retirement.”

A year earlier, Pilloton and his wife moved to Wilmington from New Jersey. They both had retirement in their sights.

“She lasted three months, then went out and got a job at Plantation Village,” he said.

After he stopped work, Pilloton realized he couldn’t sit around, either. He decided to put together two of his longtime interests, flying and photography, and pair them with his knowledge of technology.

“I was a private pilot since 1976,” he said. “I had to give up flying for medical reasons. Six or seven years ago I built a couple of custom drones and started experimenting.”

His goal was to get into drone photography, which he did, working with Crystal Glass Photography, a Wilmington company that provides marketing photos to real estate agents. In the past three years, Pilloton has expanded his skills and his reach.

“There is a real estate market for vacant land, and I’ve been working with a couple of land speculators and have also become a land inspector,” he said. “I have done actual mapping of property for developers: stitching photos together, creating a 3D model of land or a structure.”
Pilloton’s ground or air photos aren’t limited to residential real estate these days. He has worked for commercial real estate firms. And he’s mastered drone videography.

“When I started [my business], I hoped to at least pay for my equipment. Now I’m hoping to increase my profitability somewhat,” he said.

Some retirees are returning to work but not necessarily to the grind.

Many are saying they want to work at least “a bit” in retirement but on their own terms, according to a September article in Forbes.

“In part, the reasons for return includes what many might assume: money worries and the looming threat of inflation,” the article stated. “Survey data from Joblist do indicate that 27% of those … returning to work were doing so because they needed the money and another 21% feared that inflation was eroding their retirement nest egg. However, the data identify the primary reason for quietly returning to be neither money nor inflation woes.

“A full 60% of retirees returning to work said they were simply ‘looking for something to do,’” the article continued, quoting Joblist CEO Kevin Harrington as explaining, “Many people struggle with how to spend their time after they retire and miss the social connection that work provides.”

Mike Smith was driven to his return by boredom and by his wife, who told him, “Mike, you need to get a job.”

The former naval aviation electrician had retired from the U.S. Navy in 1989 and then held a series of jobs: aircraft repairman, dump-truck driver, assembler of office furniture systems and finally a warehouse position with University of North Carolina Wilmington. He retired from UNCW 12 years ago.

Shortly after his retirement, he developed heart problems, so he knew his wife’s order would not mean a full-time job with heavy responsibilities.

“I had been thinking about getting a part-time job at Lowe’s or Home Depot, but they wanted me on a schedule and working weekends,” he said. “UNCW was hiring for auxiliary parking, and they offered me 30 hours a week. I told them I might as well work full time, and I didn’t want to do that.”

Smith and his wife were in the process of buying a car. At the dealership, he met a fellow naval retiree-turned-salesperson who told him the company needed people to transport cars from one dealership to another. For three years, Smith has been in the driver’s seat, literally and figuratively, working exclusively for Stevenson-Hendrick Mazda.

“He calls me up and says, ‘Can you make a trip to Greensboro today or tomorrow?’ I tell him yes or no,” Smith said. “I can do it if I want to. There have been times I have driven as much as three times a week.

“I don’t need the job; I do it strictly for the fun of it. It gives me extra cash for emergencies. If I have enough saved up, I can take the [grand]kids to Disney World.”


Turning to the experts

Eric Hill’s retirement U-turn was the result of demand for his expertise. A 29-year environmental services employee of Brunswick County, he thought maybe in retirement he might return to college and pursue a degree in viticulture.

“But I was retired for two weeks, and the phone started ringing,” he said.

Demand for his knowledge and services “caught on fire,” Hill said. “I thought, if I am going to continue doing this, I need to be legitimate, so I contacted Miss April; she was a lot of help.”
“Miss April” is April Scott, director of Brunswick Community College’s Small Business Center. She worked with Hill on setting up his PLLC with the state of North Carolina, and, four months ago, Hill’s Environmental Consulting Services was born.

“I’m doing at least two sites a week. I’m working harder than I did when I worked for the county,” Hill said. “I need a part-time clerk and a part-time person to help in the field. I am one of only two licensed soil scientists in the country. I would be negligent if I didn’t take advantage of the opportunities here.”


Lighting up her life

Scott also helped a small business dream come true for Marge Bell. About 10 years ago, Bell retired from her position as a school social worker in New York state and moved to the Southport/Oak Island area.

To fill her time and earn extra money, she decided to sell some items from a fair-trade shop she had owned in New York at a local farmers market. But because she hadn’t made the items herself, she did not qualify as a vendor.

Then she had a brainstorm. “About 25 years ago I took an herbalism apprenticeship: took walks in the woods and made medicines out of plants. Living here, things that drove me crazy were mosquitoes and no-see-um gnats. I thought if I put my skills to work, I could make a natural repellent.”

When her concoction, Mama’s Secret Weapon, took off in 2013, Bell expanded into other natural products for skin care. Her company, Mama’s Secret, now offers more than 20 natural products, from skin soothers to balms for joint and muscle pain. She makes soaps on her back porch and has branched into dog products.

Bell sells her wares at area farmers markets, including upcoming holiday markets, and through her website: mamassecretskincare.com. She hopes to mentor a young woman – or more – to continue her endeavors. And she’s grateful for the help she has received from the Brunswick Small Business Center.
“That Small Business Center and April Scott are the most incredible resources,” Bell said. “I have taken all kinds of classes there: how to keep the books, financing, social media marketing and how to start a business.

“It’s so important, especially for retirees, to really have what lights up their life,” she said. “Many people were so dedicated to their careers; then they retire and think they’re not going to do anything. You should have what lights up your life every day.”