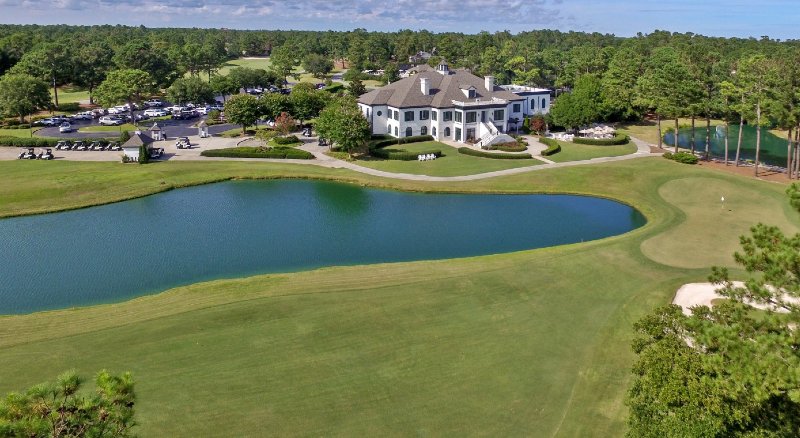 At Porters Neck Country Club, the number of golf rounds has increased during the pandemic. (Photo courtesy of Porters Neck Country Club)
Golf, on the decline in recent years, has seen renewed popularity in the months since COVID-19 limited Americans’ leisure and exercise options. That’s according to several national reports, including a November story for CBS News’ Moneywatch.

“Unlike sports like football, soccer and basketball, hitting the links allows for plenty of social distancing, while mask-wearing is a snap given golf's leisurely pace,” Megan Cerullo wrote, citing data that showed a 26% year-over-year jump in the number of rounds played in the U.S. this past September. “It can even be played alone, making golf an ideal pandemic pastime for those who can afford it.”

A number of local courses report they are seeing that upswing, thanks to the coronavirus.

“Golf is one of those sports where you don’t need to get next to other people,” said Gary Wethy, general manager of Olde Point Country Club in Hampstead.

Olde Point, a semi-private course, has seen its membership climb, but that’s due mostly to the migration of golfers from nearby Belvedere Country Club when it closed in early 2020. What Wethy has also noted, however, is a rise in novice players on the links at Olde Point.

Not only has Jason Seehafer noticed an increase: he has numbers to prove the jump seen at Porters Neck Country Club, where he is general manager.

“The pandemic had a positive effect for the golf industry and especially the private club business,” Seehafer wrote in an email. “Our golf rounds have increased over 24% over last year and it was a record-setting year for our club with over 36,000 rounds.

“We also saw a significant increase in membership and had more families and young professionals joining," he continued. "With most people working from home and schools going virtual, private clubs provided a safe haven for members to continue their everyday activities, especially for families.”

Seehafer added that the number of private golf lessons at his semi-private course increased 65% this past year. Participation by youngsters increased by more than 100%.

“Overall, we continued to communicate with our members on proper protocol, and the community worked closely together to ensure we all remained safe while still being active,” he said.

COVID also drove activity at both Magnolia Greens Golf Club and Compass Pointe Golf Club, according to the general manager for both semi-private courses.

“We’ve been extremely busy,” said Rick Ferrell. “More rounds were played [at each location] in 2020 than in any other year. More members are playing more often, and we’ve had a good bit of non-member play: that was up across the board.”

Coronavirus restrictions ate into hotel and event business at Beau Rivage Golf & Resort, but the increase in golf activity made up for that lost revenue, according to Jake Walker, the facility’s general manager.

Greens did not generate much green for golf facilities with a different business model, however. Courses in the region whose package deals draw vacationing golfers from out of state or Canada saw steep declines in their revenues, area officials said. COVID-related travel restrictions meant that those courses were populated mostly by local players, whose greens fees don’t generate needed levels of revenue.