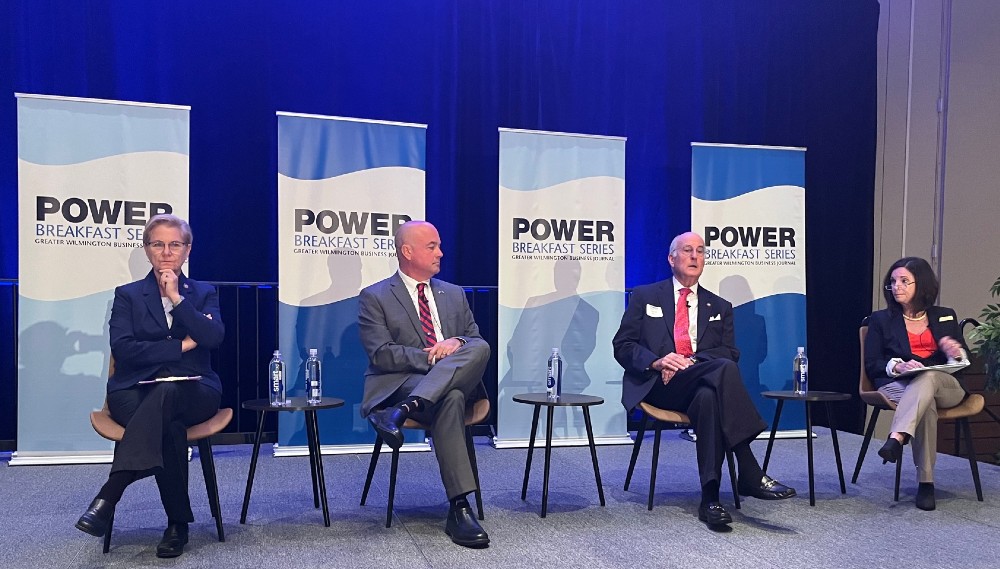 Republican and Democratic candidates for local and state offices gathered Thursday morning at the Wilmington Convention Center, answering questions on issues from how to spend state funds to abortion laws.

The candidates spoke to an audience of local business, government and organizational leaders at Wednesday morning’s Power Breakfast, hosted by the Greater Wilmington Business Journal in advance of the November election. Those running in the N.C. House of Representatives race are incumbent Rep. Ted Davis, R-New Hanover, and his opponent, Amy Block DeLoach, a Democrat, for the District 20 seat; and Rep. Deb Butler, D-New Hanover, and her opponent John Hinnant, a Republican, for the District 18 seat.

The event also featured the candidates for two New Hanover County Board of Commissioners' seats.

Asked about ways to fund infrastructure improvements, Davis said, “Traffic congestion is a terrible problem that we have in New Hanover County. We need to work on getting our roads in better shape, our bridges in better shape.”

A former New Hanover County commissioner, Davis was first appointed to fill a House seat in 2012 and has served five full terms. Adding to his traffic comments, he said, “We have a revenue source for handling traffic through the gas tax. Also in the 2022 budget, the state has allotted more money to address infrastructure problems that we have with traffic so we need to continue to have the state to provide income and revenue so that we can address the problems that we have.”

The path to easing traffic woes “is not by adding more lanes; it's by adding better public transportation. And if we add more bus routes as well as the frequency of those bus routes, as well as a robust Amtrack system throughout the state, that would help. … it would help our workforce get to work and help our climate by adding less emissions,” said DeLoach, who has worked in real estate and volunteered on numerous Wilmington boards.

She added, “The good news is, too, that [President Joe] Biden just passed the bipartisan infrastructure bill. So we have some funds that we can write grants for to help with our bridge as well as the traffic problem”

Hinnant, a commercial real estate broker and former head of Wilmington Downtown Inc., responded to the infrastructure question by saying, “We do need to replace the Cape Fear Memorial Bridge but it's after we get a new crossing across the river.”

At the same time, Butler added, “We are going to have to have an expansion of electric vehicle charging stations across this state, because that's the path forward. That's the future. We need to be ready for it."

With abortion having an impact on election season after the Supreme Court struck it down as a federal right, an audience member wanted to know what the incumbents and candidates think about a potential ban. Currently, women in North Carolina are legally allowed to have an abortion up to 20 weeks with no restrictions.

Davis said, “I am a supporter of the law; therefore I support what the law is in North Carolina… I can tell you right now I would never vote to get rid of abortions.”

DeLoach’s response included the statement, “I am 100% pro-choice. Government does not belong in this decision at all, and I trust women to make what the right decision is for them.”

When it was Hinnant’s turn to answer, he said he doesn’t think the current law is unreasonable or that abortion should be illegal but that he might prefer more of a 15-week window with exceptions.

Butler was more adamant, saying, “Let's get it straight – the Speaker of the House has said that you can expect an abortion ban put forward if a supermajority is achieved in Raleigh now. I don't think anybody can ever truly be free if they're not in control of their own body. Women make difficult choices. They deserve the right to plan their family. It affects career choices. It affects educational choices, and men should care about this issue just as strongly as women do because planning a family is just that – it is a fundamental right of privacy and we should support that, all of us, because if they come for your constitutional rights, they're coming for yours next.”

Candidates talked about the value of economic development incentives, supporting them to bring in more industry and compete with other states for employers.

Butler said, “I feel that we have had enough smokestack industry to last a lifetime. We are at the end of the Cape Fear River, which has served as a dumping ground. We know the struggle that we're having with forever chemicals in our water. So we want to recruit jobs that are based in biotech or finance … we want to incentivize well-paying jobs that don't contaminate our environment.”

“Higher education, community colleges and schools need to immediately start skills training for those programs,” he said, using the example of aeronautics.

Later in the conversation, Davis talked about incentives for the film industry.

“I've been the leading proponent for film in the house ever since I've been to Raleigh. I fight for it every time the budget process comes up. Right now we have a $31 million a year film grant amount that is recurring," he said. "Film is a clean industry; it does not pollute.”

He added that the money earned by film industry workers “has a very big trickle-down effect.”

DeLoach said, “As far as the film industry is concerned, I agree with that, that's something that we do need to support and we can support them by keeping bans on abortion from coming to the state,” citing reports about moviemakers deciding to relocate filming from Arkansas to North Carolina as a result of the abortion ban in Arkansas.

The candidates were asked what they would want to spend more money on.

Lee, who was first appointed to the senate in 2014, answered the spending question by saying he wants to spend more money on early childhood, mental health and education generally.

He said, "Although we have been increasing education spending every year, we need to be increasing it for not just general education but also teacher pay – we've been doing that as well. $2.5 billion in the last two years and increasing teacher pay.

“We created the PEPSC [the Professional Educator Preparation and Standards Commission] looking at how we compensate our teachers, licensures, so we are not paying the best teacher and worst teacher the same amount of money. As we move forward, we really need to be looking at not just how much money we spend, but how we spend it, and also, are we getting the outcomes that we want to get? Not just increasing funding, looking at other areas and planning for the future on how we can do better.”

To hear more of the exchanges between Lee and Morgan, watch a video of their segment during the Power Breakfast on the Greater Wilmington Business Journal's YouTube channel.