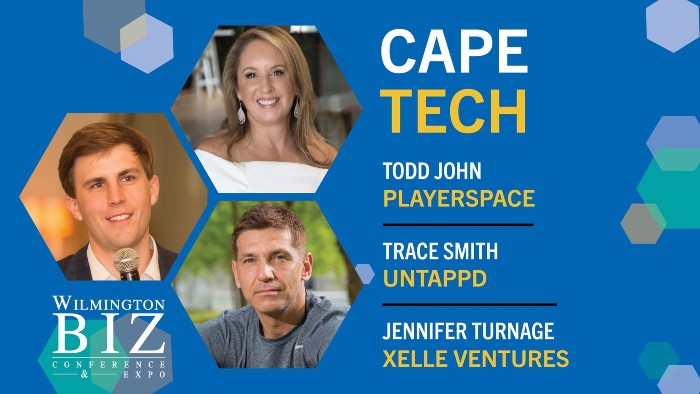 Local tech leaders discussed how they approached a succesful exit for their Wilmington-based companies at the virtual WilmingtonBiz Expo.
For two Wilmington tech companies, getting a successful exit was a matter of building relationships, growing the business to attract potential investors and finding the right fit.

That was discussed by Todd John, founder of PlayerSpace, Trace Smith, CEO of Next Glass and Jennifer Turnage, co-founder and CEO of myBeeHive and co-founder of xElle Ventures at today’s virtual WilmingtonBiz Expo.

Next Glass, a Wilmington company that develops software for the alcohol beverage industry including the app Untappd, built relationships and met with investors all over the country before its exit earlier this year.

“We had grown to double-digit millions ARR [annual recurring revenue] so we were on the radar of most growth equity funds,” Smith said during the expo. “You can tell pretty quickly who's interested and who's not by [whether] a partner gets on a plane and comes to you. And we had several firms from Boston, New York, the Bay area, fly out to Wilmington to come meet with us starting in 2016, 2017.”

As Next Glass started to scale in 2019, it began to attract interest from strategic buyers, including from companies in the social media industry, but many of those companies were not the right fit, he said.

“Kurt [Taylor] and I talked about it and entering 2020, we just didn't feel that was the right outcome for the business,” Smith said. “We weren't confident that those companies would let us maintain a presence in Wilmington. We didn't think that was right for our employees or for the local community.”

Eventually, Next Glass was able to narrow down to 10 potential partners and its leaders did a three-city, two-week roadshow at the end of January to meet with potential buyers.

“In our case, Providence Strategic Growth in Boston actually front-ran the deal. They got in front of all the other firms. They said we want to do this, what do we need to do in order to get it done?” Smith said.

Representatives with the equity firm flew to Wilmington and they got a term sheet signed on Valentine’s Day, shortly before the onset of the COVID-19 pandemic in the U.S.

“I'll never forget sitting in my living room the night the NBA season got postponed. And then all the other sports seem to kind of domino behind it, postponing their seasons,” Smith said. “I was thinking it's going to be tough to get done. This may not get done in this environment. It’s a huge testament to Providence Strategic Growth in their word and resolve as an investor to hang in there with us and get this done so we closed it at the end of March.”

For John of PlayerSpace, a sports and program management software company, the possibility of selling the company ramped up five years ago when it started to grow and strategically became competitors with potential buyers, he said.

“I learned a lot from him [serian entrepreneur Randall Kaplan] and he said when you start to get into that place where you feel like you've got something special and you're getting those inquiries about acquisition, what you really have to do is uncomfortable,” John said. “You have to really become competitors, increase the level of intensity of competition among the potential acquirers. So, we started to do that.”

From 2015 to 2019, PlayerSpace became a real competitor in the sports and program management field, John said.

“I knew that once we got to that point, we're either going to have to go and do a big raise or it's time to sell and I was leaning towards selling,” he said.

“It's all about relationships. You have to be likable; you have to build those relationships. We got to the point where we were like, ‘Oh yeah, we really like each other. We feel comfortable. Let’s get serious.’ That's when we stopped all the conversations with everybody else went down the exclusive path with them,” John said.

Those conversations started in July of 2019 and the acquisition became final in January of this year, he said.

Choosing to partner with a private equity firm is a trend becoming more popular among tech companies over the past few years, Turnage said.

“What I saw, it started about seven or eight years ago, was that private equity kind of became a viable exit or liquidity option for tech companies,” she said. “Until that, you were either looking to be acquired by a strategic partner, a competitor or looking for an IPO, it's almost one of those two options.”

“It does give you a way to possibly have more competition in your exit because it is a financial decision, but it comes with funding to take the company to a whole different level,” Turnage said. “Often there's some immediate liquidity and long-term jobs will stay where they are and even have the budget for more hiring. I think that's been a very interesting trend I'm starting to see.”

The VR way to train