The Eagle Readies For A Rocktoberfest Landing 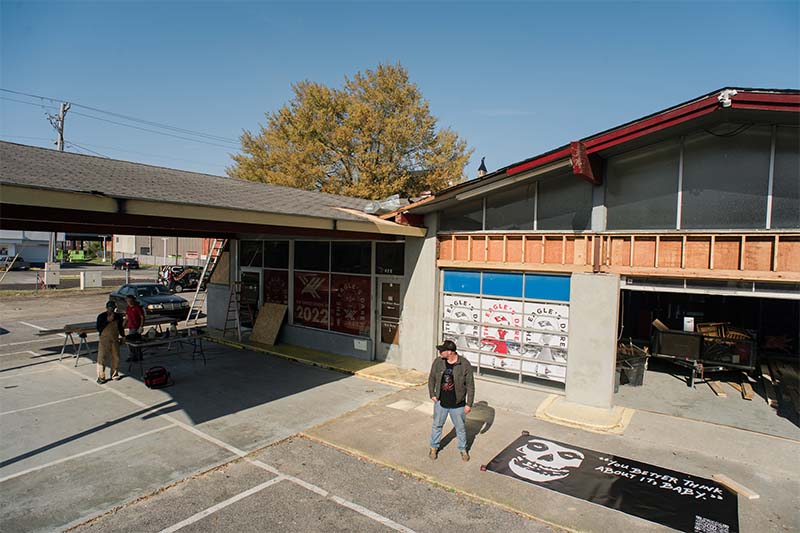 After months of anticipation, The Eagle’s Dare, a cocktail bar and beer garden, will hold its grand opening Oct. 1. Owner Joe Apkarian has dubbed the event Rocktoberfest, and it promises a confluence of food, drink and music in the establishment’s parking lot.

“We are throwing a parking lot party and all are invited,” Apkarian stated in a recent post on The Eagle’s Dare’s Facebook page. “Coming straight from Nashville, Tennessee are the kings of Nashville Honky-Tonk, The Cowpokes! Joining them are some rocking local acts, Free Drinks and The Total Classic.”

The event, which takes place from noon to 11 p.m., will feature items from Webo’s Food Truck and Catering.

Apkarian is no stranger to the hospitality industry. He is involved in two other downtown Wilmington establishments, as owner of Pour House and co-owner of Tacobaby.

The Eagle’s Dare, housed in a long-vacant former service station at 420 N. Third St., is going for a retro, rock ‘n’ roll and rockabilly look and feel, according to Apkarian. He said Tuesday that the bar’s back room is named for Wanda Jackson, known as the "Queen of Rockabilly." But during October, Wanda will be in disguise for a series of Halloween-themed events.

“We’re decorating the room as a Halloween pop-up and calling it the 'poisoned apple,'” Apkarian said Tuesday.

Meanwhile, tickets for Rocktoberfest are available through Eventbrite. The advance ticket price is $10. A portion of event proceeds will benefit Wilmington’s Domestic Violence Shelter and Services.