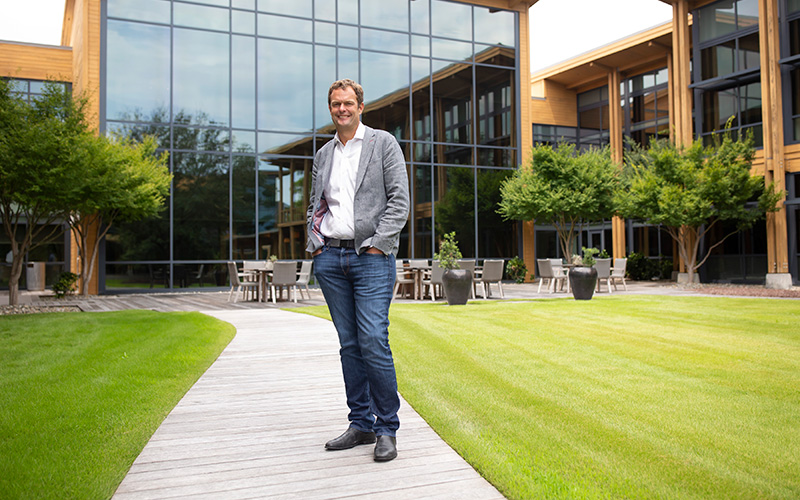 (photos by Madeline Gray)
Bolstered by new economic development incentives, one of Wilmington’s only publicly traded companies is poised to continue expanding its footprint and workforce for years to come.

Construction could start before the end of the year on the fourth building at Live Oak Bank’s expansive campus in midtown Wilmington, as the online-only financial institution works to add more than 200 employees over the next five years.

The bank’s success since its founding in the Port City about 15 years ago by James “Chip” Mahan III was built through SBA lending to niche industries.

To Huntley Garriott, the number of small businesses in the U.S. – about 30 million, 6 million of which have revenues of $500,000 to $5 million – means the bank’s growth will continue. In turn, he anticipates that growth will fuel a prosperous future.

Garriott, who was appointed president of the bank in 2018, said Live Oak’s future is not solely dependent on the SBA. The SBA is “still a big piece of our lending, but we’ve diversified beyond that, and so we have some programs through the USDA, which is like a parallel program, and we do conventional lending like other banks, and a lot of the growth we’re looking at is really more on the deposit side.”

He also said, “With everything that we have planned as it relates to how we build and how we’re going to go to market, we think we’re just getting started.” 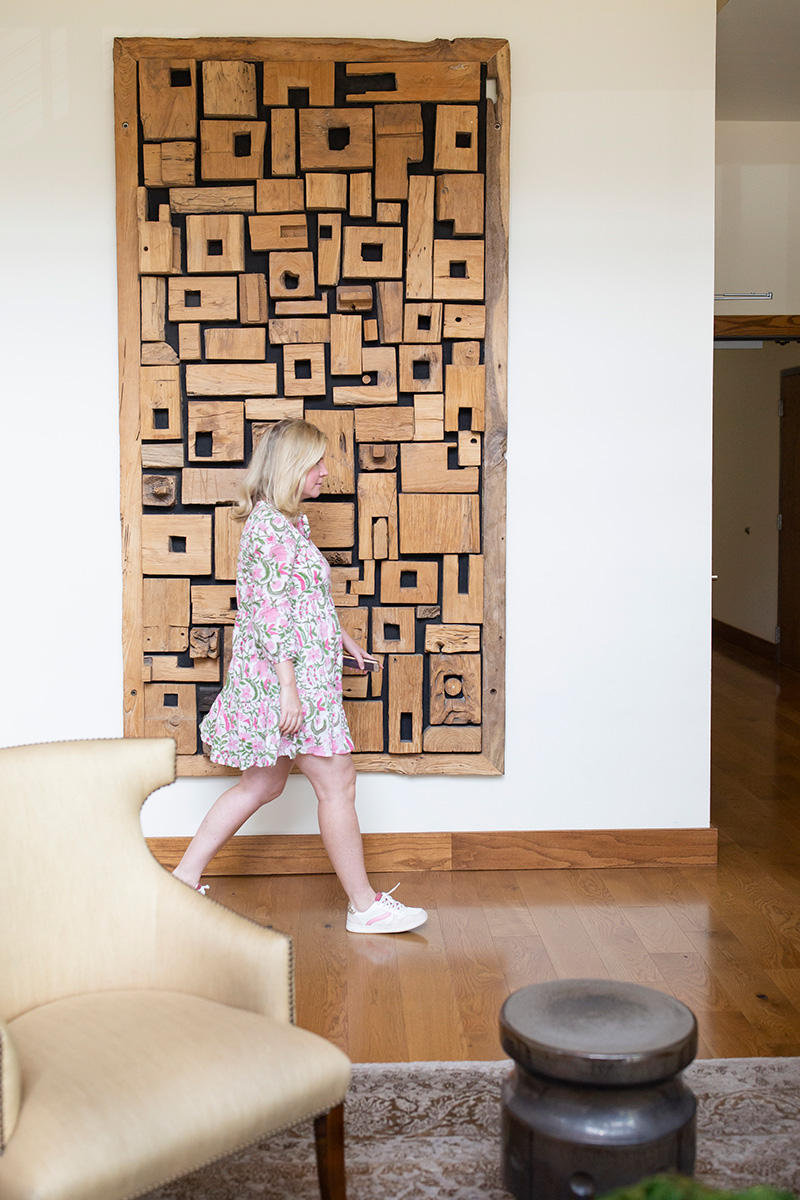 Local municipalities and the state of North Carolina are supporting Live Oak’s efforts to grow through economic incentives.

On Sept. 7 (should we hedge this to In early September in case they change the date?), Gov. Roy Cooper traveled to Live Oak’s campus, tucked into a wooded 100-acre site off Independence Boulevard, to announce that Live Oak is the recipient of a $1.5 million Job Development Investment Grant (JDIG). The grant is based on Live Oak’s five-year plan to hire 204 more employees who will be paid an average salary of nearly $102,000 – almost twice as much as New Hanover County’s average yearly wage of $53,421.

The bank currently employs about 900 people, including 550 in Wilmington, and has benefited from county and city of Wilmington incentives in the past as it added second and third structures to its campus, which crews started to build on Tiburon Drive in 2013.

But that’s not the end of the bank’s impact on the Wilmington workforce when it comes to higher-paying jobs.

Banking software firm nCino spun off from Live Oak in 2011, growing to fill its own campus in Wilmington’s Mayfaire office park. Publicly traded nCino (Nasdaq: NCNO) has grown to employ at least 700 people in Wilmington and is valued at $4 billion.

Live Oak Bancshares (Nasdaq: LOB), the parent company of Live Oak Bank, debuted on the Nasdaq in 2015, reporting in the second quarter of this year a loan and lease portfolio worth $7 billion and a net income of about $97 million, or $2.16 per diluted share.

That income included a pretax gain of a little over $120 million from the sale of Live Oak’s investment in Finxact Inc. in 2022.


TALLYING UP THE WORKFORCE


Developing a fintech workforce has come with challenges.

In May, a federal judge dismissed a class-action lawsuit filed against Live Oak and Apiture after approving a settlement agreement with a former employee.

The companies agreed to pay a combined $4.65 million, which will be shared among 1,925 class members.

The case revolved around the allegation of a no-hire agreement among executives of Live Oak Bank, Apiture and nCino.

According to a Greater Wilmington Business Journal article, the suit alleged that a “gentleman’s agreement” effectively suppressed wages for eligible employees.

The companies have declined to comment on the matter. According to the May article, nCino had not engaged in any settlement negotiations and had denied the allegations in court.

Despite that dispute, local officials anticipate Live Oak will continue to play “a significant role” in growing the tech workforce and attracting more tech firms to the area, said Wilmington Mayor Bill Saffo.

Garriott said the latest incentives will support Live Oak in its recruiting efforts, in addition to helping the bank grow its campus. Other local funding is set to help foster more tech workers: On Aug. 16, the Wilmington City Council approved awarding $2.5 million in American Rescue Plan Act funding to launch DigitalBridge Wilmington, described by the city as “a partnership working with employers to create a modern digital upskilling, re-skilling, and job-pairing program.” 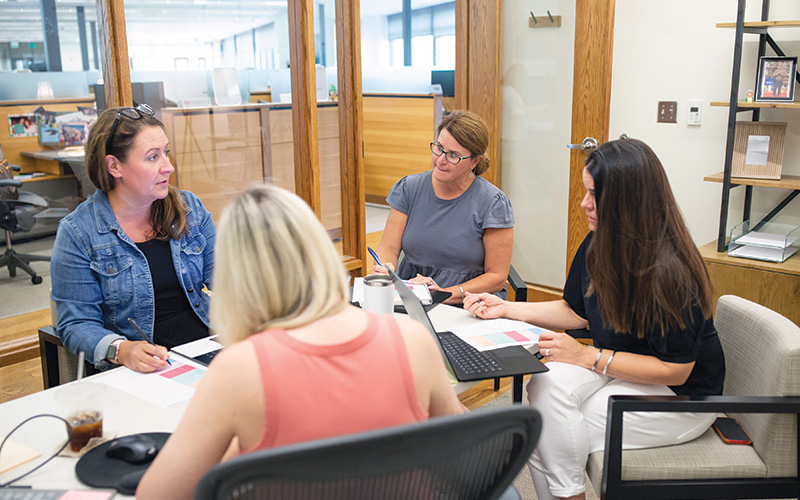 Garriott said Live Oak officials are “excited about the work that the city and we and other employers are doing on this tech talent pipeline development. I think that’s a key piece of this …  for the jobs that we think are coming, especially technology-related jobs.”

Cape Fear Collective, a social impact organization that grew from and is supported by Live Oak Bank, “will oversee the Talent Pipeline Management, evaluation of services and inform curriculum and program development for DigitalBridge Wilmington,” a city announcement stated in August.

“This year, it’s all about building trust, because in a minority community, trust did not exist when it comes to banks … ‘you can’t get loans,’ ‘no one wants to give you anything,’ you know, all of those things that you hear from the minority community,” said Chakema Clinton-Quintana, vice president of inclusive small business for Live Oak Bank, who leads Channel.

“Since we opened Nov. 15, 2021, we’ve spent a lot of time talking with people, meeting the business owners where they are and understanding their needs. But most of all, just the relationship piece of it.”

Referring to Channel and Cape Fear Collective, Saffo said Live Oak isn’t “myopic. They’re looking outward, not looking inward. They don’t just care about their footprint; they’re looking at the overall city and the overall region. What can we do to improve the lives of citizens? What can we do to improve Wilmington? And you know, you don’t get that from every company.”

Channel aims to help small business owners find the resources they need to stay on a path of growth, a path that is often riddled with barriers, officials said.

Business owners of varying levels – from those who just came up with an idea for a venture or those who already have a limited liability company and in-between – have been using the resources at Channel, where both Clinton-Quintana and inclusive small business coordinator Jamar Jenkins are two of the main people helping to guide them.

The goal is to show small business owners, some of whom might want to open a storefront or buy their places of business, “the pathway to the right capital” and scale in a sustainable way, Clinton-Quintana said.

Channel client Franchon Francees is the founder of Healing Your Almond, a leadership development program named after the almond-shaped portion of the brain called the amygdala.

“The amygdala is responsible for telling you whether you’re physically or emotionally safe or not. I specialize in that part of the brain,” said Francees, who is also a licensed clinical mental health counselor and a certified trauma practitioner and trainer. 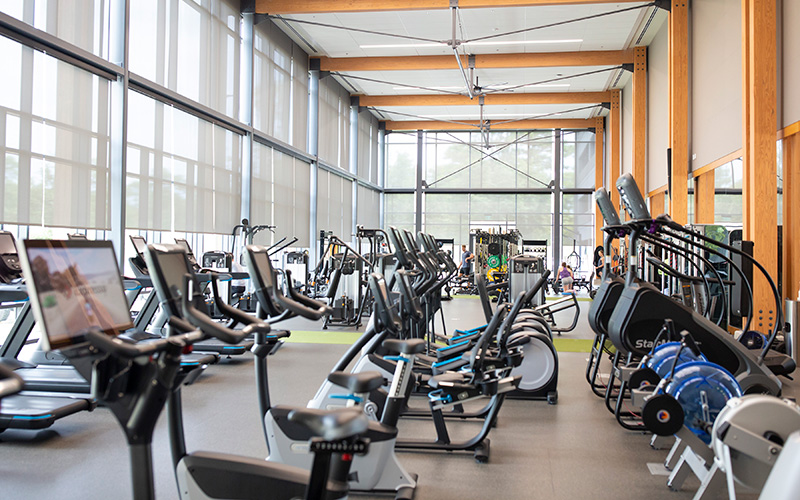 n a weekday at the end of August, Francees used one of the office spaces at Channel to work on Healing Your Almond. During an unscheduled interview catching her between appointments, Francees was candid about what she’s gleaned from the small business center.

“Channel has helped me because Wilmington is a not-great place for people of color. It’s specifically not great for very confident women of color,” she said. “So there has been no place in Wilmington that I felt comfortable other than my home until I met Jamar and Chakema from Channel.”


Live Oak has attracted plenty of notice outside Wilmington.

“They’ve certainly changed the way bankers look at their business and their processes because they are so unique,” said Peter Gwaltney, president and CEO of the N.C. Bankers Association. “Whether it’s the way they originate loans and work with their borrowers across 50 states with automation and the processes and software that they use to how they work with the SBA, USDA, for government guaranteed lending.”

He fields questions about the company from other bankers while traveling to conferences and meetings.

“They’re just so interested and curious about their model and the innovation that they’ve brought to the industry,” Gwaltney said.

He also noted Live Oak’s connections to investments in new companies in Wilmington and beyond.

“They have been quite the incubator for fintech firms that are focused on providing services to banks to make banks more efficient, more effective, more profitable, to help banks provide better customer service, whether it’s on the deposit side or the loan side,” Gwaltney said. “Most of the companies that they have invested in and helped incubate have been very successful.”

Garriott said he expects Live Oak to continue on a course of fostering other companies as well as working toward its own expansion goals.

“I would say at a high level, we continue to see growth opportunities (in Wilmington),” he said.

“We’ve continued to enjoy great success hiring people here in Wilmington; it’s still the headquarters … We love finding people here in this local community and attracting people to come here. Both of those are still mission central.”