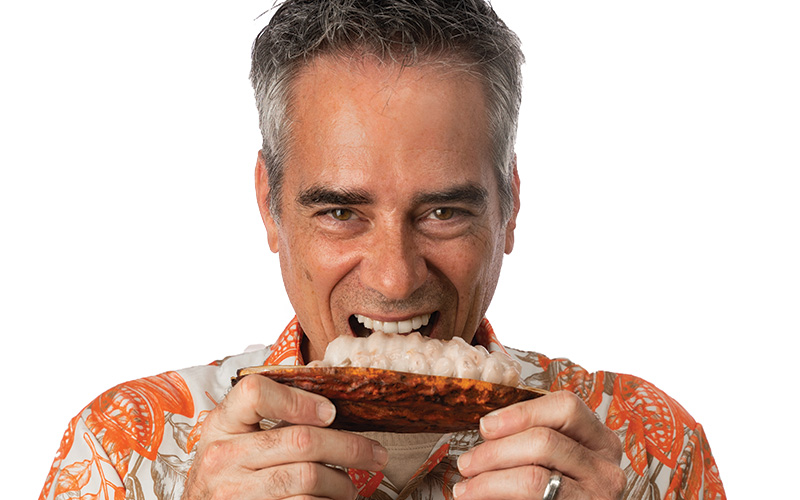 bevCacao founder Jason Walter with a cacao pod (story photos by Logan Burke & Daria Amato)
“Necessity is the mother of invention” is a proverb describing that innovation often arises from a place of need.

For Wilmington resident Jason Walter, his “need” was to enrich his diet with nutrient-dense drinks after a cancer diagnosis, and his “invention” was a beverage made from cacao fruit pulp.

When it comes to innovation, many think about university-backed research, software companies and patents for gadgets, but the region is also home to those innovating in the beverage and food industry as well as the supporting spaces that allow business owners and innovators to experiment and grow.

Walter made a career shift to nutritional product creation after being diagnosed 12 years ago with the same type of cancer that his brother had died of. After going through intense treatment – which he described as brutal four rounds of chemotherapy and six surgeries  – Walter started learning about nutrition and began making and drinking juice concoctions.

Every morning, he would go through the long procedure of making his drinks, which involved lots of veggies and other ingredients such as dandelion leaves. Walter said these drinks along with lifestyle changes helped him endure some of the most intensive treatments he underwent.

“I don’t tell people how to handle their own medical situations, that was just how I dealt with mine,” he said. “I believe it was the right move for me because I’m still here.”

While researching and learning more about raw materials, he came across the cacao fruit and learned about its health benefits.

“I went to a chocolate bean-to-bar class for 30 days to learn everything I could learn about cacao powder and chocolate,” he said. “That was where I first got introduced to the cacao fruit, and I just became obsessed with it.”

Out of this research, bevCacao was born, which Walter describes as his flagship product.

bevCacao is canned cacao juice squeezed from the pulp of the cacao fruit. Described as a “super fruit,” the drink “delivers a supreme serving of antioxidants, electrolytes and minerals,” its website stated.

Developing the product was not easy due to the COVID-19 pandemic and the shutdowns and shortages that it created, but Walter was able to come up with a finished drink early this year.

While a young product, the drink has already gotten recognition from the beverage industry. In May, bevCacao was named a finalist in the Best Functional Drink category of the 2022 InnoBev Awards. Presented by Zenith Global, a food and beverage consultancy firm based in the U.K., the awards sought to recognize excellence and innovation across sectors of the global soft drink industry.

Although bevCacao did not win, being a finalist among large industry players such as Tropicana Brands Group and PepsiCo was still a great feat for the company, Walter said.

Along with bevCacao, another local innovative beverage has been growing and distributing its products throughout the U.S. with health in mind. Wine Water is the creation of Amy and Rob Kuchar, a wife-and-husband team with years of experience in the alcoholic beverage industry who wanted to introduce a healthier wine option to the market.

“Obviously, we’re wine drinkers and living in coastal North Carolina creates a lot of opportunity to be on the beach, on the boat, by the pool – areas where drinking 12-14% alcohol by volume wine just isn’t conducive to enjoying a day with friends and family,” Rob Kuchar said.

Finding the right balance between water and wine took many tries. The Kuchars contacted winemaking partners in France and started working on more concentrated versions of French varietals that would hold up better after being blended with sparkling water, he said.

“After many iterations, we landed on a recipe that gave us the light presentation we wanted but still maintained the subtle characteristics of the wine,” he said.

Much like bevCacao, Wine Water is targeting health-conscious consumers.

“We believe that consumer awareness has been, and will continue to be, focused on what they’re actually putting in their bodies so we’re choosing to innovate in the cleaner, healthier, adult beverage space,” Rob Kuchar said.

For Walter’s bevCacao journey, getting to know the health-conscious market was made easier thanks to Wilmington being home to a large population of them.

“One of the cool things about Wilmington is it’s a relatively healthy area, so they’re very receptive to health products,” he said.

An issue for a young company is finding the right manufacturers who are willing to produce smaller batches, according to Walter. bevCacao does not produce locally; Walter said he wishes there was a production facility in the region that he could use.

“The big problem you have when you’re creating a product like this is you can’t be small,” he said.

For Wine Water, finding partners for the product was a matter of who could handle its sales demand.

“Due to extreme sales growth right out of the gates, we had to move to the larger winery partner to ensure that we could meet demand,” Rob Kuchar said. 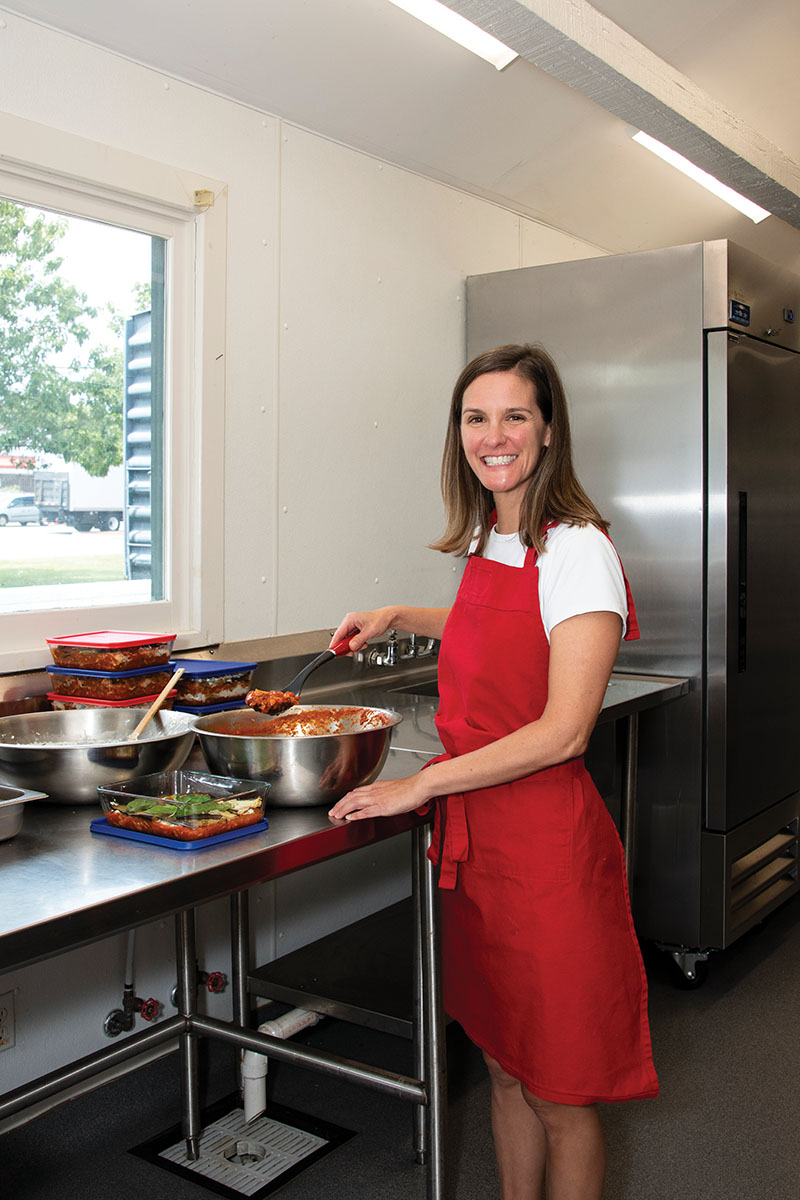 While Walter and the Kuchars have delved into the world of drink creation and production, for smaller operations – from those trying out new recipes to food truck owners – having a central location for ideation and creation is important.

One local resource with the goal to harvest food innovators and support small business is the Burgaw Incubator Kitchen. Located in the Burgaw Depot, the facility includes a shared-use commercial kitchen.

When the town wanted to renovate the space years ago, the idea to install a commercial kitchen was sparked, said Cody Suggs, Burgaw’s parks and recreation director, who helps oversee the incubator.

The facility is open 24 hours, giving it scheduling flexibility. Tenants can prepare foods, wash dishes, conduct product development, do food prep, use fridge and pantry storage and more.
The incubator has been used as a launching pad for many businesses that can use the space to cut down startup costs. Eventually, many outgrow the space and can get their own locations. This includes chef Abbye McGee with Salt + Charm, whose business of meal prep delivery and pick-up services experienced a boost during the COVID-19 pandemic.

During this time, the business got its own space at The Cargo District at 702 S. 17th St. McGee also continued to expand at the district with the opening of her and Matthew Ray’s project, The Starling Whiskey and Wine Bar.

Other tenants may be following in her steps, including up-and-coming Chris’s Cosmic Cheesecakes, which are now a staple at farmers markets, and Weezie’s Colorful Kitchen, another meal delivery service with a focus on healthy meals and sustainability.

Started by Louise Davenport, the meals are free of refined sugars, flour, gluten and processed oils and are delivered in reusable glass containers as opposed to single-use receptacles.
Davenport’s mission to be sustainable has spread to the incubator where she helped bring a composting program.

Another large chunk of tenants includes food trucks, which are required by health departments to report to a commissary kitchen after service. Food trucks have seen an increase in popularity recently.

“It seems like every call that we get is ‘Were looking to start a food truck,’ or ‘Hey, I have a food truck and we need space,’” Suggs said.

Space seems to be a key issue for many of those in the food business, especially food trucks, said Michelle Rock, co-owner of the food truck T’Geaux Boys.

Because of health department regulations, mobile units have different requirements.

“Some counties are stricter, some counties are easier,” Rock said about regulations. “New Hanover County happens to be one of the strictest, which is good because you want them to be thorough.”

Food trucks that don’t have a brick-and-mortar location must either apply to the health department to use the kitchen at an existing restaurant or a commissary kitchen.

Because of this, T’Geaux Boys, Poor Piggy’s food truck and Irv’s Signature Catering teamed up to purchase a space for use on College Road.

Rocks, who also does food truck consulting, said Wilmington is behind the times as far as food trucking goes and that opening more kitchen spaces would be one way to address the issue.

“We need a warehouse that’s nothing but a commissary kitchen. It would have to be a big one with enough equipment for several trucks to run out of,” she said.

“One of the pillars of Genesis Block is to lower the barriers and cost for entrepreneurs to get to the market,” Genesis Block co-founder Girard Newkirk said. “We have directly applied this methodology to support local food entrepreneurs. Block Eatz significantly lowers startup costs for chefs to launch their business, and the kitchen commissary provides space for meal preparation.”

At the food hall incubator, Block Eatz-affiliated entrepreneurs will have a six-month licensing agreement for the space with free rent, zero upfit and utilities cost, free equipment usage and get the benefit of brand recognition and entrepreneur training, Newkirk said.

Block Eatz companies will share a portion of their revenue, and companies can rent kitchen commissary space for meal preparation, according to a press release.

The space is a response to Genesis hearing from food entrepreneurs about some of the roadblocks to launch.

“Food entrepreneurs have voiced that there is a lack of commissary kitchen space in the area, and also the startup cost for a brick-and-mortar is so high that it’s too risky for new startups,” Newkirk said.

Since 2000, the state has been tracking its innovation standing and ways to advance the state’s economy by harnessing innovation. The 2021 Tracking Innovation report found that the state ranks 20th in the nation for innovation overall.

Innovation is important because the consumer mindset is changing rapidly with the massive amounts of information now available to us all, said Rob Kuchar.

“It’s about authenticity, quality, experience and simplicity,” he said. “We believe that is what consumers want and what we will always strive to develop.”

Starting a business with an innovative product gives Walter an edge over others, he said.

“To have a product that is innovative, it gives you a lane to ride in, kind of like when you’re going up to D.C., they have that HOV lane and it’s such a great feeling if you can get into the hub lane and just go and everybody else is sitting there in the other lanes, fighting it out in traffic,” he said. “It’s kind of that type of feeling. Having a product that nobody else has is an advantage for sure.”