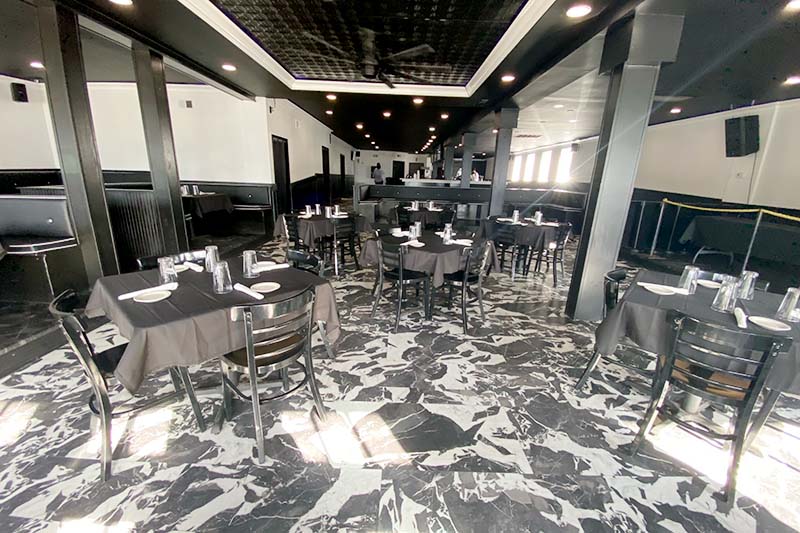 22 North, whose name reflects its location at 22 N. Lumina Ave., has reopened after a revamp that took several months.

“We have completely renovated the entire inside of the restaurant,” executive chef Gary Walker said last week. “It was a massive overhaul. Everything was gutted and rebuilt.”

Walker said that owner Casey Rhyne is “going for more of an upscale modern style, pushing away from the dive bar scene it used to be.”

While still welcoming 22 North’s Friday and Saturday late-night crowd, Walker said, Rhyne wanted to modernize the establishment he has owned since early 2020, and create a place that’s higher-end but comfortable.

“We’ve done it in blacks, whites and poppy colors,” Walker said of the décor. “We tore down the front bar and extended a new bar in the back. We ripped out the wall that sectioned off the front and bank, and installed risers to create a platform [for tables against the walls].”

Walker, who joined the enterprise last September, brought some ideas from his previous position at the former 1900 Restaurant & Lounge in Lumina Station. Rhyne, he said, liked the “lounge-y” feel of that restaurant and wanted to incorporate some of those elements, and bring an “essence” of the renovated look into the menu.

“There was a lot of creole stuff, heavy seafood,” Walker said of the restaurant’s former menu. “We wanted to make it more for everybody, so I tried to throw out what there was before." The new menu will be all small plates – no massive entrees. There will be a section of shareables and appetizers. The main items are going to be a couple of entrees scaled down to half-portions. Customers can get several to share across the table.

“With prices of items just skyrocketing, it’s a way to offer, say, a New York strip for $20; you get a 4-5 ounce portion but with all accoutrements. It’s a nice meal at a more affordable price.”

Lower-priced, small portions of dishes customers perhaps haven’t tried before is also a way to explore new tastes and see what they like, Walker added. But the new menu will also include some more familiar dishes.

“I put on a gourmet burger section to give people options of things they will be comfortable getting,” he continued. “Our Cowboy Burger, for example, has smoked gouda cheese and fried jalapeños. Our original 22 North Burger will still be on the menu, along with our crab dip and 1 pound of crab legs. There will also be a kids’ menu and a late-night menu.”

Also returning are the blackboard specials, a 22 North staple. There’s a possibility the blackboard could return soon, with a couple of new items on it, but Walker isn’t promising. What he does guarantee is that, once the restaurant is up and running and the blackboard is back in its place, there will be a daily “ocean’s offering” – his term for Catch of the Day.

“I used to work at Mott’s Seafood to learn how to break down whole fish and to get involved in the fishing community and understand where the products were coming from,” he said. “On my way into work each day, I will stop off at Mott’s to see what we want to offer that day."

22 North is open now for dinner Thursday through Saturday with a limited menu as Rhyne and Walker do final tweaks. Once everything is complete, the restaurant will be open Wednesday through Sunday. Walker said the new menu should be rolled out by Aug. 18.