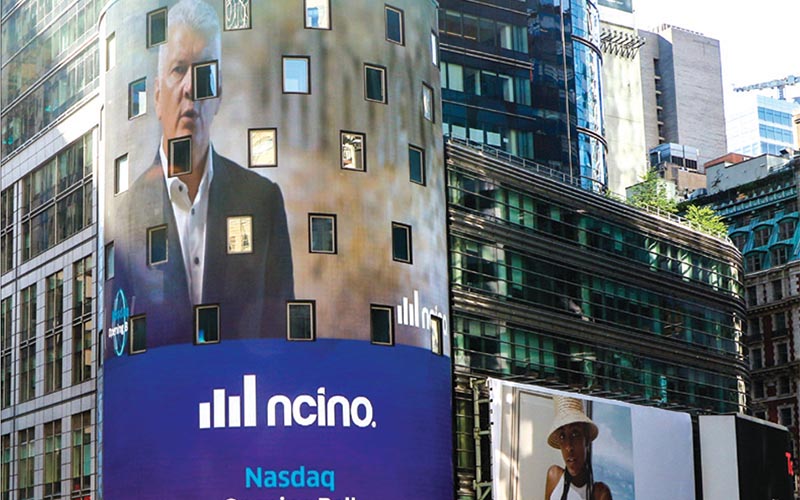 nCino CEO Pierre Naudé appears on the big screen in Times Square in July on the day his Wilmington-based banking software firm debuted on the Nasdaq. (Photo c/o nCino)
CEO Pierre Naudé took the helm of Wilmington-based nCino in 2012, steering the banking software firm’s growth from five employees to more than 900 and from a private firm to its debut on the Nasdaq in July.

On its first day of trading, nCino’s stock skyrocketed by more than 150%. nCino, a spinoff of Wilmington’s Live Oak Bank that had $138 million in revenue in its most recent fiscal year, is now valued at close to $7 billion.

Born in South Africa, Naudé grew up on a farm before join­ing the military and then going into banking. He decided that he wanted to build his career in the States, but also knew to excel in the U.S. he would need an American college degree. So while holding down a banking job, he put himself through night classes at Upper Iowa University and earned a bachelor’s degree in finance and management.

Naudé met Live Oak founder Chip Mahan at Altanta-based S1 Corp., where Mahan was previ­ously chairman and CEO. Naudé had been in global senior manage­ment at Unisys Corp. before that.

In 2019, Naudé said watching nCino grow into a worldwide leader in cloud banking with of­fices in five countries has been the ultimate highlight of his career.

In Wilmington, he said nCi­no has found the infrastructure, talent and resources to propel it from a small startup to a powerful industry leader.
Naudé is a Keynote Speaker at this year's WilmingtonBiz Conference & Expo. Learn more about this year's event by visiting WilmingtonBizExpo.com.