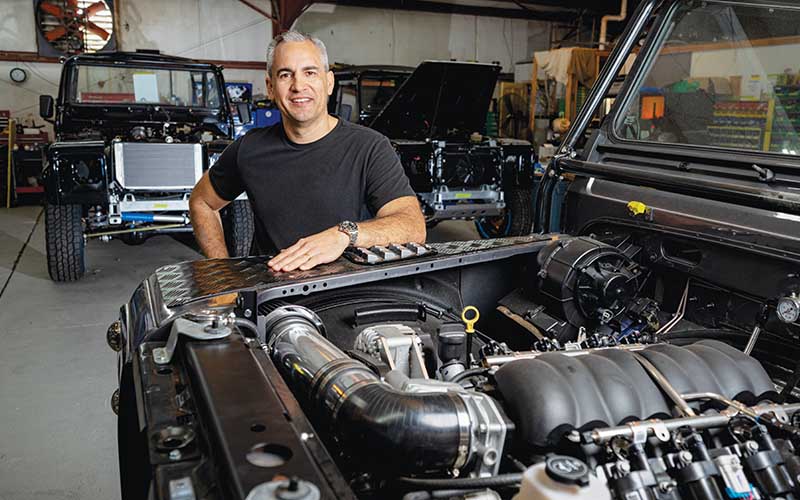 In 2009, he spent time at his home purchasing older vehicles, taking them apart and selling off the parts as a side business. Over the years, however, that project transformed into a full business, as Richardet later moved the work into a larger space outside his home and hired his first employee.

“We started having people that wanted to do installations on their cars. We were doing mid-’90s Land Rover Discoveries and Range Rovers, and things like that, predominantly. And then we started to work with local people who had [Land Rover] Defenders,” Richardet said. “From there, that’s kind of where it grew.”

That passion has turned into the high-end custom vehicle build and restoration business that is now Osprey Custom Cars, which was started in 2013. The business conducts full restorations and repowers of Land Rover Defender models but will also work on other truck models and cars.

The company in 2016 settled into its Castle Hayne location, an 11,000-square-foot facility that houses its office space, finishing room, fabrication shop and paint, body and warehouse space.

This month, the company anticipates finalizing work on another 3,500-square-foot detached building on its property for Osprey Custom Cars’ new inventory, warehousing and storage.

“Right now, when we get cars finished, we have a couple of storage places in town … and we end up shuffling things around. And so now, to get it all on the one property is going to be really nice,” Richardet said. “I have a lot of people fly in that want to see our work … so it’s going to serve as a showroom as well to give customers a first-hand look at our portfolio.”

Osprey Custom Cars maintains a steady business of about 45 ground-up builds of its custom-made vehicles annually, as well as about 25 vehicle restorations, Richardet said. The company has 17 employees.

The firm offers built-to-suit orders, which can include options on the Land Rover’s color, engine, transmission, body style and interiors.

Osprey Custom Cars orders parts, or has them made to specifications, and brings them all in-house to the shop for assembly, Richardet said. The vehicle is assembled using proprietary brackets, adaptors and wiring. Paint and finishing also take place at the Castle Hayne facility.

A full-build construction takes about five to six months to complete, Richardet said, adding that when finished, he personally delivers the vehicles to customers.

“The thing we pride ourselves on is our white glove service, which includes direct access to myself as the owner as well as lead techs during the ownership of your car,” Richardet said.

“Wilmington has a pretty good car culture and a big group of guys and gals in it,” Richardet said, adding that its customer base extends nationally and internationally.

The COVID-19 pandemic, however, is making it difficult to gain access to the supplies and parts the company needs. As the firm works to overcome these challenges, Richardet said he is also focusing the company’s efforts on reducing turnaround times for its orders.

The firm has grown to a nice size to fit its niche market, Richardet said. Instead of focusing on growth beyond the scope of its current business, Richardet said he would like to continue enhancing the quality of its builds and becoming faster at getting its products to customers.

“We’re working on efficiency. Everything that we have built over the past decade is to get it as honed in as possible,” Richardet said. “I don’t want to ever sacrifice quality over volume. So I try to keep my quality at the absolute tip-top and have fewer customers.”

The firm tries to work with local vendors on everything from engines and transmissions to mufflers and upholstery. Osprey Custom Cars is also looking to add to its local vendors list, to keep the area’s economy growing, he said.

“We’re always looking to replace our outsourced vendors with local vendors,” he said. “For us, it’s not always about money as much as it is quality and time.” 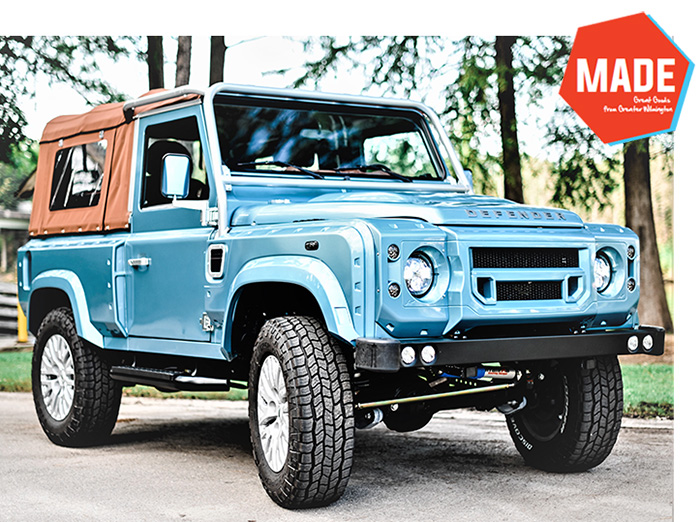 Company description: “Osprey Custom Cars builds and restores older Land Rover Defender models. The custom vehicles retain both the look and charm of the older vehicle. However, the interior, drive train and added accessories create a new, modern and luxurious vehicle that aims to contain the best of both worlds. These custom vehicles are built to be faster and more comfortable than the original.”

Products made locally: Custom-built and -designed Land Rover Defender models are the company’s main restoration model. The firm has restored and built other models.

What made the company decide to make its goods locally? Richardet: “I came here in 1998 on vacation, and my wife and I decided to skip the 40 years working in the Midwest and skip to where we’d want to retire to. It’s also a great place to find talented employees as it’s a great place to live.”

What’s your target market? Richardet: “We’re looking for the individual that always wanted a classic Land Rover Defender or Ford Bronco but wants the modern drivetrain. We consider our vehicles to be rolling and driving functional art. After all, our trucks carry a high price tag, so they get the best parts available on the ground-up builds.”

What’s planned next? Richardet: “We keep designing more custom parts to eliminate a need for outside vendors. We are upping our quality control, starting with vendors all the way to our final product.”