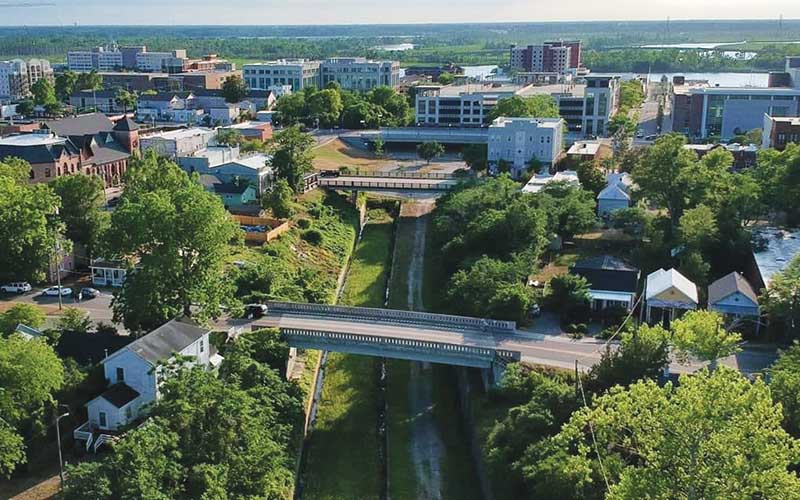 With the Wilmington Rail Trail Public Survey that closed Oct. 9, the exhaustive process of preparing to develop a master plan for the trail in partnership with community leaders, city and county officials, business and organization representatives, neighborhood residents and other stakeholders is complete.

“The survey results and research done on the sites will inform the master plan, which will allow the consulting firm that we are working with out of Raleigh to draft the plan and provide a 30-day comment period for public feedback, which will enable us to have a complete master plan by the end of the year,” Bellamy explained.

The overall plan is to transform the old Atlantic Coast Line rail bed that runs through the Northside community of downtown Wilmington between Campbell and Brunswick streets from McRae Street down to Third Street near Cape Fear Community College’s Wilson Center into a public corridor for foot and bicycle traffic.

“Few cities have available land in the middle of the city that’s been unutilized, and this pedestrian rail bed runs right through the center of a community and will serve these residents,” Bellamy said. “This pedestrian plaza will allow access through several points along the trail with cultural and recreational amenities.”

The partnership alliance that has worked to make the Rail Trail a real­ity looked at similar projects such as the New York City’s High Line and the Swamp Rabbit Trail in Green­ville, South Carolina, for inspiration.

According to the Wilmington Rail Trail website, the goals of the trail include creating a “unique space for art, exercise, and community en­gagement…foster economic develop­ment…(and) honor and celebrate the local history and culture.”

In addition to being a walking and biking path, it will be a place to view public art exhibits, including sculp­tures and murals. What exactly fits into the space and where it is placed will be determined after consulting all stakeholders.

“We always wanted this to be a community effort, and longtime resi­dents of the Northside neighborhood are very excited. They know the value of a park in that area,” Bellamy said.

The project represents the mar­riage of planning and public input, say officials who have been collabo­rating on it.

“We are working with the Rail Trail to maintain current existing right of ways and what appropriate cross sections are to be in line with what citizens of Wilmington and the northside neighborhood want to see in that area,” said Abby Lorenzo, project manager with the Wilmington Urban Area Metropolitan Planning Organization (WMPO). “With the feedback from the survey, we can wrap everything up and get a unified vision of what it will look like.”

Based on a progress report pro­vided from the survey, a safe area for walking and biking recreation was listed as a perceived benefit to the trail, in addition to opportunities for health and wellness and an increased quality of life.
Aubrey Parsley, a member of the steering committee for the WMPO and the city’s director of Wilmington Rail Realignment, calls it “a fantastic project with a ton of potential.”

“The master plan will firm up the vision of what the trail could be and how the community could use it,” Parsley said. “The trail is multi-mod­al with key coordination for con­necting parts of downtown with the Northside neighborhood. The con­nectivity is exciting, especially when you add in the potential for a pas­senger rail. A lot of pieces [will] come together with this project.”

The long-term strategy is to bring passenger rail service to Wilming­ton, and the Rail Trail preserves the access for the potential of rail service to be built while maintaining a safe corridor for pedestrian traffic.

The completion of the master plan allows the community to see what that potential is and how the Rail Trail will serve them; it also provides the opportunity to seek out funding for the project, officials said.

“The first step was to develop a master plan, and the next phase is to identify funding to fund improve­ments,” Mike Kozlosky, executive director of the WMPO, said.

While the WMPO will make some money available for the project, in addition to potential funds from the N.C. Department of Transportation, and the city’s Capital Improvement Plan, grants will be sought to fill any gaps needed.

The Rail Trail is only a section of a much larger plan created in 2013 with the Wilmington/New Hanover County Comprehensive Greenway Plan.

“This is only the beginning phase of the overall downtown Greenway Plan that will link downtown with Forest Hills, then eventually connect to the Cross City Trail,” Kozlosky, explained. “This sets the stage for use of the corridor for multi-modal transportation and passenger rail at some point.”

The utilization of this trail is made possible through a lease with the De­partment of Transportation, which is interested in maintaining future rail service, according to Kozlosky.

In the meantime, the Rail Trail hopes to serve the community and visitors alike.

“It’ll be a showpiece, not just for the Northside neighborhood, but for visitors. I really see visitors utilizing this trail,” Lorenzo said. “One Hill Tree [TV show shot in Wilmington] fans can use it to see the famous [Sixth Street] bridge, and I think it will really attract people and they will utilize it.”

Whether using it for recreation or for transportation, it aims to serve both roles in a safe and enjoyable fashion.

“Ultimately, the Rail Trail will have a positive impact on the city of Wilmington and our transportation network,” Kozlosky added.

To learn more about the Wilm­ington Rail Trail, visit wilmington­railtrail.com or find on Facebook at Facebook.com/wilmingtonrailtrail.