Good things are happening all around our region. It’s true. Some initiatives are more familiar than others, but in addition to the City of Wilmington’s comprehensive plan and New Hanover County “charting the course” through PLAN NHC, there are other significant initiatives in progress that will impact the way we see our region over coming decades.

All of these local initiatives have one thing in common … each community has taken the responsibility to look into the future, considered what’s important to the community, and committed to a plan to make the dream a reality. These communities are transformational self-starters. They’re some the Cape Fear’s super heroes of local community development and this dedication needs to be harnessed for the region.

I’d like to share a few examples of these regional transformers with you, so you understand firsthand what local planning can achieve with the right focus and public support.

Shallotte has implemented new urbanism strategies to better position itself as the sub-regional commercial center for Southern Brunswick County – positioned between Wilmington and Myrtle Beach.

Shallotte is a great example of how community spirit and civic patience can deliver a highly beneficial outcome. Back in 2008, the town’s Board of Aldermen saw both necessity and opportunity when looking at their area’s future. Shallotte’s Vision Plan, adopted in 2008, is a land-use plan that addresses the revitalization of the town’s downtown and vicinity. It focuses on the area on Main Street from Smith Avenue to Whiteville Road. Based on public input, the plan outlines three primary objectives:

This Vision Plan has served as a roadmap for key decisions that the town has made in recent years. By understanding what it wanted to be in the future and by putting reasonable guidelines in place to get there, Shallotte has made great strides in regaining access to the Shallotte River, in encouraging infill housing development where there is an existing infrastructure investment, in supporting a wider range of housing choices, and in becoming a business hub.

Surf City is developing a complementary multi-faceted town center on the mainland that is transforming it into the primary hub between Wilmington and Jacksonville.

The Town of Surf City has set its sights on becoming the sub-regional commercial center to serve the U.S. 17 corridor between Wilmington and Jacksonville. The community has an opportunity to capitalize on the significant populations of the urban hubs from the north and south and it’s taking significant steps to raise its public profile, spearheading several projects that will help ensure its enduring success. These include:  The town is also focusing on improving pedestrian and bicycle pathways. The first leg of the project is complete, with sidewalks and boardwalks joining the island with the mainland business center. Plans to continue sidewalks and crosswalks in the northern part of the island portion of Surf City will begin in the fall. This and other future projects will become part of the city’s recently started N.C. DOT bicycle and pedestrian comprehensive planning process.

Burgaw is recalibrating its historic downtown to stay relevant and competitive, as traditional market functions gravitate to national chain, semi-big boxes on the bypass.

The Town of Burgaw plans how to invest grant money with the goal of long-term gain, electing to use its municipal service district funds to designate the downtown area for a town grant to offset impact fees for new uses. In doing this, Burgaw is bolstering its opportunity to spur local investment that will make an enduring economic impact. Ventures include developing downtown restaurants and accessory apartments above storefronts. The Town Board has committed up to $40,000 per year in grant funds for the next five fiscal years as an incentive to potential investors who envision a flourishing town center.

CFCC is also expanding course offerings at its Burgaw campus. Matched with new campus in Surf City, CFCC is playing a significant role in tapping into the Pender County partnership.
………….

When you look into the premise behind these initiatives, all of the communities share traits that have driven their commitment to developing strong future plans. As Shallotte, Surf City and Burgaw have shown, there’s a winning combination to being a transformative self-starter: leadership, community engagement, business support, and dedication to public goals. That’s what super heroes are all about, right?

Actually, it’s that and more. The driving motivation for each transformation comes down to choice. These communities and their leaders all chose to make planning a priority in identifying and addressing their community’s future needs. If you want it, push for it. It’s that simple.

Now, it’s your turn. I’d like to hear from you. There are lots of local initiatives – large and small – going on around us that are set to make a cumulative impact in our region. Tell us about other great projects you see happening and we’ll make sure to spread the word.

Al Sharp is Project Director for FOCUS, a community-based planning consortium. FOCUS empowers local planning groups, businesses, and civic organizations through data gathering and public input, helping them to zero in on new opportunities to thoughtfully grow their own communities and our region. To learn more about FOCUS, sign up to receive our newsletter at focussenc.org.

Other Posts from Al Sharp

Three Teachable Moments Are Revealed. The Public Has Spoken About Regional Growth.

Is A More United Regional Approach To Growth And Development Possible? Signs Point To “Yes”

The Case For A Strong Regional Plan 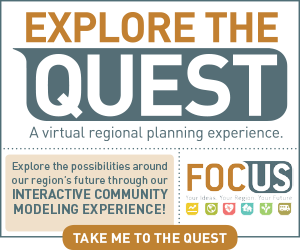