Over the years, many people have asked me, “How did Old North State Trust, LLC (ONST) come into existence in North Carolina?” It was founded in 1994 as a Registered Investment Advisor and received its charter from the N.C. Banking Commission. In February 2004, it began operating as a trust company.

ONST is an independent and family owned trust company. But our story actually beings four generations ago, well before ONST became a registered investment adviser and trust company.

It all started with the de St. Aubin family, who first settled in Canada before moving to Chicago. As a 10-year-old young boy, Ovide G. de St. Aubin, Sr. worked for Marshall Field’s in the wholesale dry goods department and over time worked his way up to become the head wine buyer of the company’s European division.
That all changed when the Cripple Creek Silver Rush of the 1890s drew Ovide and his brother to Colorado. The siblings built two general stores in Colorado during this period; when the rush ended, they moved back to Chicago and started the St. Aubin Nursery business.

In 1916, Ovide discovered the business opportunities offered by the apparel industry and went into business with his sons, Percival and Ovide, Jr. (also known as Tam). The father and sons operated apparel and hosiery businesses until the deaths of Percival in 1940 and Ovide in 1943, with Ovide Jr. becoming CEO of the various family companies until his death in 1967. His son, Ovide E. de St. Aubin, entered the family businesses in the late 1950s, primarily working in the hosiery operations, before succeeding his father with his brother-in-law, Richard W. O’Brien, Jr. In 1985, the apparel and hosiery business was sold and the money from the sale went into the holding company of Pohatcong Investors, Inc.

After years of entrepreneurial ventures within the family, Tam Senior’s younger son Denis started Heritage Concrete Corporation in the late 1980s. With Denis at the lead, Tam Jr. joined Denis in the structuring of the concrete business. After getting married in 1992, Denis became interested in the financial industry with his family and his father-in-law, who was a leading figure with Chatham Bank. Chatham Bank was later acquired by First Union Bank and subsequently merged with Wachovia (now Wells Fargo).

In 1992, Denis started a registered investment company (RIC) called Heritage Investments, and changed its name in 1994 to North State Financial. After a few years as a RIC, Denis saw a need for providing trust services and in 2004 became one of the few locally owned and independent trust companies in North Carolina. In February 2014, ONST celebrated its 10th anniversary as a trust company in North Carolina.

The family philosophy that has been passed down through the generations is to always take care of the clients and the employees, and to stay aboveboard and honest in all business transactions. We as a family and company live by these values each and every day.

Susan Willett is the director of trust services and oversees all aspects of trust administration for Old North State Trust, LLC. Old North State Trust, a North Carolina chartered trust company, provides: asset management services; income, estate and trust tax consulting; retirement planning and administration; and trustee and estate services to both individuals and businesses. Old North State Trust professionals have many years of experience and for over a decade have assisted clients in identifying and reaching their financial goals. For more information, visit www.oldnorthstatetrust.com or call 910-399-5470.

Other Posts from Susan Willett

Don’t Get Conned: How to Spot Crowdsourcing Campaign Scams

Think Ahead to Weigh Long-Term Care Insurance and Alternatives

Inheriting an IRA Comes with Complexities and Potential Dangers

Beneficiary Designations: Are You Up to Date?

Divorced? You May Be Eligible for Boosted Retirement Benefits

Reverse Mortgage Can Be Helpful but Beware of Pitfalls

Time to Have 'The Talk'?

Being Executor of an Estate is Tough, Not a Job for Just Anybody

How Will the New Tax Cuts Impact You?

Fighting Alzheimer’s: A Debilitating Condition Many of Us Will Face

A Relationship You Can Trust

The Merits Of Trusts Vs. Guardianships For Minor Children

What About Bam (Or Fido)?

We’re Living In Scary Times – How To Protect Yourself

What Retirees Need to Know

What I Learned From The WILMA Grads

Use Your Will To Specify How To Handle Debts

You Earned It, Now What Do You Do With It?

Who Do You Trust?

Defending Inheritance And Gifts From Divorce

The Benefits of Being a Fiduciary

Are You My Second Cousin Or My First Cousin Once Removed?

The ABCs Of Time And Money Management

Heirs Not So Reliable? Consider Skipping A Generation

Plan For The Worst And Hope For The Best

One Certainty About Investments Is Markets Hate Uncertainty

Don't Settle For Being A Larger Institution's 'Loss Leader'

The Olympics of Savings

What To Know About Inherited IRAs

The Happy Medium Of Investing: Pay Attention, But Not Too Much

Failure To Write, Update A Will Can Create Crisis For Survivors

Who Will Handle Your Estate’s Tangible Assets?

The Reality Regarding Alternative Assets

Defend Against Identify Theft With Common Sense And Skepticism

How To Listen Effectively And Serve Clients Better

Do You Really Want To Leave A Large Inheritance?

The Drawbacks Of Robo-Advisers

Trusts Can Include Incentives For Heirs To Act Responsibly

Charity Or Family? You Can Assist Both

Don’t Neglect To Leave Instructions About Your ‘Stuff’

Preparing Children For The Eventual Transfer Of Wealth

People Without Heirs Need To Do Estate Planning, Too

Review My Will? Why?

Managing Your Money Through Living Trusts

Trusts Are Invaluable For People With Special Needs – And Their Families

Is A Living Trust Better Than A Typical Investment Account?

‘Elder Law’ Documents Are Important – And Not Just For The Elderly

How To Avoid Estate-Planning Mistakes

Tax Planning Must Be Personalized To Clients’ Unique Goals

Where, Oh Where Has My Customer Service Gone?

Managing Your Assets Like You Would Manage Them Yourself 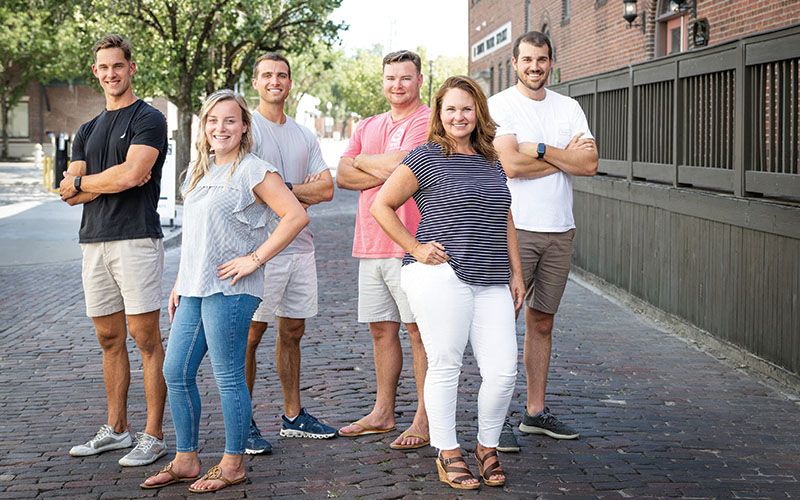 ­­­With a background in banking and technology and an interest in breweries, Natalie Waggett, and a team of Wilmington locals, have started...

Rebekah Roth has a front-seat view when it comes to development unfolding now – and coming soon – in New Hanover County....