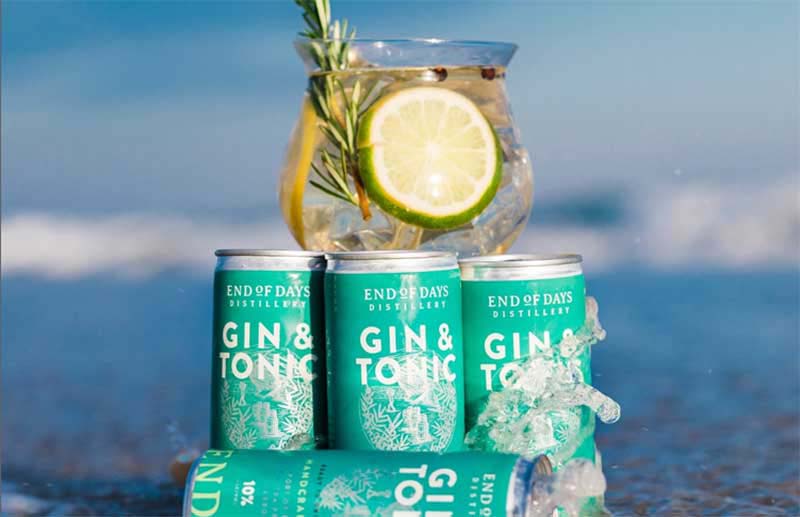 The Castle Street-based operation has ramped up its production of spirits and is now present across North Carolina. The distillery is producing nine beverages, including three recently released ready-to-drink cocktails as well as its line of Port of Entry vodka, rum and gin.

Based off already popular cocktails served at the Distillery Lounge, the three new drinks are different: The Hurricane contains rum, passion fruit and citrus, while the Cargo Mule has vodka, ginger, lemongrass and citrus. The third of the new drinks is a favorite of End of Days regulars: a gin and tonic with a mix of ingredients of a tonic syrup and a custom botanical blend. The three drinks were recently released for statewide distribution.

With a booming distillery and the release of the new drink line, End of Days is fast outgrowing its space on Castle Street, so owners recently acquired an additional space nearby, said Oliver Earney, End of Days’ operations and marketing leader.

Not wanting to take away from the uniqueness of the existing space on Castle Street, the new space will be used for processing and storage. The original space, a former military storage space, had many incarnations before End of Days moved into it in early 2020.

The new space located on Wrightsville Avenue near the distillery’s Castle Street home base will support the production and packaging as well as storage for barrel aging and canning of products. The new space will provide a much-needed opportunity for a fully separated packaging facility.

“We realized last year that we were going to outgrow our current space very quickly, so when this opportunity for a warehouse came up, it was something we knew we wanted to pursue,” Earney said.

Earney added that having the additional space close by will also allow them to stay in the unique World War II-era building that everyone has become accustomed to.

Growth in space is not the only area of the distillery growing. Current plans are to have a whiskey program up and running by the end of 2022.

The Wilmington-based spirit maker first began in 2019 and opened its doors one month before the pandemic began has endured through COVID and the many supply chain issues it caused.

“We realized early on,” Earney said, “we wanted to be adaptable to new ways and new possibilities.”