TOP STORY OF THE YEAR: A Backyard Energy Revolution 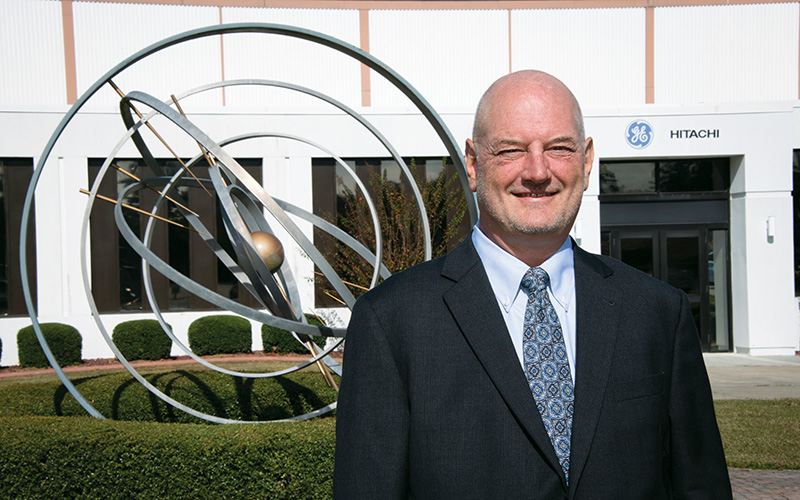 The future of the nation’s – and world’s – energy security and carbon-free grid is being pioneered in New Hanover County. It may sound lofty, but GE Hitachi is undertaking ambitious projects with transformative potential.

GE Hitachi’s October expansion reveal was the largest private jobs announcement out of New Hanover County this year, amid a flurry of other projects planned in the region.

In a five-year period, the firm plans to hire 485 employees at a $131,000 salary – double the median household income in New Hanover County estimated by Federal Reserve Economic Data.

The hiring spree is needed to support GE Hitachi’s two relatively new ventures. One effort involves the planning and planned deployment of the firm’s first small modular reactor design, the BWRX-300. This new era of boiling water nuclear reactors represents more compact and economical models intended to be more seamlessly installed compared to the first generation of aging reactors built at the end of the century.

Several international organizations and one domestic utility have signed agreements over the past year to explore potentially building the BWRX-300, which can use fuel produced at the Castle Hayne campus.

GE Hitachi’s other recent endeavor includes work on the design of a different advanced nuclear reactor that utilizes sodium (rather than water) as its cooling agent.

Fuel for this sodium reactor is planned to be produced at a new $85 million facility on GE Hitachi’s Castle Hayne campus as part of a cost-sharing partnership with the U.S. Office of Nuclear Energy.

With up to 50% federal cost sharing in play for the new fuel facility, GE Hitachi also stands to earn up to $1.5 million from New Hanover County and the city of Wilmington through a performance-based incentives package.

The Castle Hayne campus has produced nuclear fuel since 1969 and has been GE’s nuclear headquarters since 2003. This experience led the company to select the site for the new facility it plans to begin constructing next year.

“What better way to do it than just grow where we’re already good and we have a team here instead of a greenfield where you have to stand up all the infrastructure again?” GE Hitachi President and CEO Jay Wileman said in a recent interview for WilmingtonBiz Magazine.

To read more about GE Hitachi’s expansion, go to WilmingtonBizMagazine.com.

Tech trends in the new year