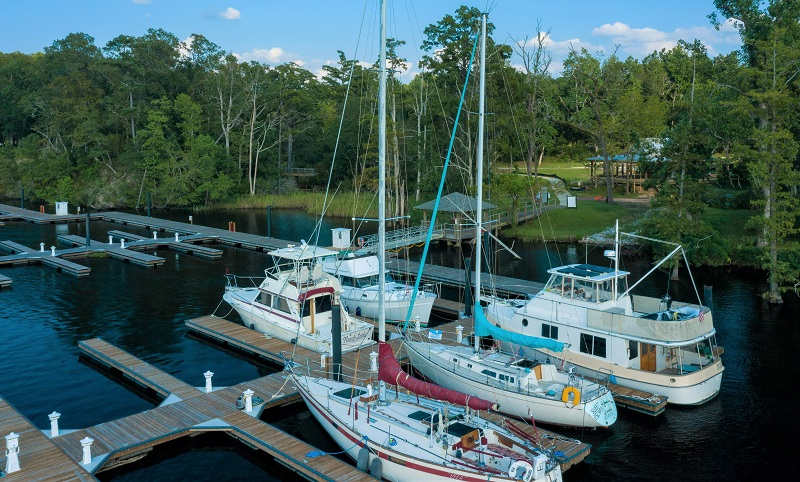 The developer built a 36-wet slip marina, and has permits that will allow 152 additional wet slips to be built in the future, said John Lennon, director of sales and marketing with River Bluffs Development Corp.

The marina opened at the end of 2020, he said, adding that of the 36 wet slips, there are now four under contract. Slips are being sold to River Bluff residents only.

The marina is located at the southern end of the development's property along with a half-mile-long riverwalk, he said.

"People are more and more discovering the Northeast Cape Fear River and recreational aspects of it," Lennon said.

Both the docks and the riverwalk were constructed by Bellingham Marine Industries.

"We will continue to add slips as the market demands," Lennon said. "We do have several slips that are pre-permitted for floating slips, which basically allows you to drive your boat up on it to get it out of the water."

Any additional construction for the marina would have to take place between October and February due to environmental restrictions, he said.

There is also boat and RV storage, which is currently at capacity, for the community, he said. The developer, however, is in the process of getting ready to enlarge its dry storage space as well.

There are about 50 spaces in the gated yard area, Lennon said, with plans to at least double the size.

"We have the ability to enlarge that significantly and that work will be commencing in the next month or so," Lennon said. "We have a lot of residents that choose to trailer their boats."

In the residential community itself, River Bluffs is currently at 215 occupied homes.

There have been more than 270 lots sold in the community, which will end up with about 650 home sites when fully developed, he said.

River Bluffs just recently opened two new sections: Cottage Park, a collection of cottage-style homes priced in the mid-$300,000s; and a week ago, the developer finished the first building of Mariner's Watch, which consists of three-story townhomes located by the marina.

Lennon said, "We are very excited about those and have seen great response and interest."