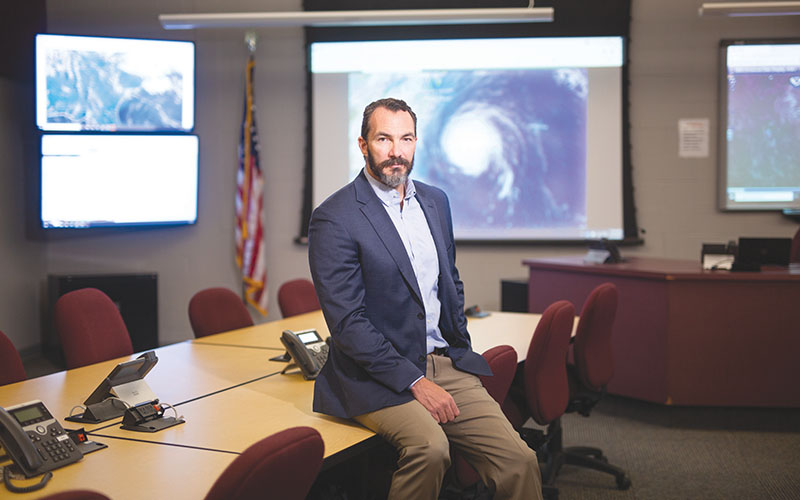 Steven Still, emergency management director for New Hanover County, and other local officials involved in hurricane preparation say improvements have followed in the wake of recent storms. (Photo by Terah Wilson)
While the term ‘’infrastructure improvements” may bring to mind images of bridge construction and road repair, the concept applies to system upgrades and is at the heart of preparations for this year’s hurricane season that started June 1, officials say.

Duke Energy has focused its attention locally on creating an electrical system that will better weather storms and recover from them quickly.

As storms become more severe, Brooks continued, Duke Energy has to make improvements to its power grids to help equipment better withstand higher winds and flooding. Of great importance also is improving the system’s ability to recover quickly from disruptions.

The aim of recent work in New Hanover County has focused on resilience.

“We have a self-healing technology that we’re installing on poles all around the region,” he said. “It automatically detects power outages and reroutes power to other lines to restore power more quickly. We already have some units in place in Wilmington and we see benefits happening every day and with every storm.”

During Hurricane Isaias last August, a large portion of Wilmington lost power, but Brooks said in some neighborhoods the electricity stayed on, thanks to the new self-healing technology.

Duke Energy has also improved its infrastructure by upgrading its transmission line over the Cape Fear River near the Port of Wilmington to accommodate larger ships and to increase the line’s capability to withstand higher winds. It has added protections around its substations, especially in flood-prone areas. And it has installed additional energy pathways on Bald Head Island to prevent flood-driven extended outages the island has seen in the past.

In areas of substantial growth – think Brunswick County and the Porters Neck area of New Hanover County – Duke’s infrastructure improvements aim to expand capacity to support businesses and homes, according to Brooks. The utility company is upgrading more than 100 wood poles in Brunswick County to steel poles, mainly in swampy, hard-to-access areas that saw outages in previous storms. And in Porters Neck, Duke Energy is adding a new substation and new transmission lines to improve the grid’s reliability and ability to serve a growing population.

The Kings Grant community will see its power lines buried, thanks to Duke Energy’s recognition of the area’s vulnerability to storm damage.

“After Florence, we had some primary shelter sites that we’d used for a period of time. But things had happened to these shelter sites – mechanical failures, water intrusion – so we had to move to [other] schools.”

Now, two storms later, Still says his department has been working with the public schools to identify which locations would be optimal to use as shelters and what improvements are needed to ensure that these sites will have power and other necessities.

“We’re still doing facility assessments,” he continued, explaining that the county wants to make sure its shelters are spread out geographically and are not located in flood zones.

One of CFPUA’s primary concerns during a natural disaster is its ability to pump and treat water, so a reliable source of energy is a must. Hurricane Florence’s heavy sustained rains essentially cut off the county from the surrounding region by floodwaters, and the water utility was unable to receive additional fuel supplies from its contractor. Even so, because of advance measures it took before Florence hit, CFPUA was able to maintain uninterrupted water and sewer services to all but a few customers during the hurricane and its aftermath, spokesman Vaughn Hagerty said.

But the storm revealed vulnerabilities, and since then CFPUA has purchased its own fuel truck, trained and licensed personnel to drive it and secured certifications and hazmat clearance for them. If a fuel vendor cannot deliver supplies during an emergency, CFPUA can send in its own truck and crew.

“To ensure electrical power is available, critical CFPUA sites have emergency generators on-site yearround or that are dispatched to the sites ahead of severe weather,” company officials stated in a May 11 news release about its hurricane preparedness efforts.

“In the event of a widespread, prolonged loss of power, stored fuel capacity would allow these facilities to continue running for days,” the release stated.

When a hurricane or tropical storm is approaching the region, CFPUA activates its emergency operations center, which remains in operation until the storm has passed and recovery is complete. Because in some severe weather events essential staff must shelter in place, CFPUA water and wastewater facilities have been equipped to house them.

To enable its customers to stay abreast of water and sewer conditions during emergencies, CFPUA has created an alert system. People can sign up at CFPUA.org/CivicReady.

Although strengthening grids and systems of many kinds is essential for hurricane preparedness, infrastructure improvements also extend to another kind of network: that of cooperative relationships that engage many parts of the community.

New Hanover County, like CFPUA, learned about its fuel vulnerability during Hurricane Florence and subsequent hurricanes.

“County government, especially in the area of public safety, that’s a fuel-intensive [operation] because of our generators, fleets, emergency services,” Still said. “We made sure after Florence, knowing that we can be cut off, that we had contracts with secondary and tertiary fuel suppliers.”

Connecting with local fuel suppliers was the start; now the county has woven a fabric of local businesses that can provide needed supplies of all sorts during emergency periods.

“If we make those relationships now while the skies are blue, they will [remain] during the storm,” Still said.

Another part of the local hurricane preparedness infrastructure has taken shape since Hurricane Florence, said Beth Schrader, director of New Hanover County’s Recovery & Resilience Office. That’s a network of agencies, schools, nonprofits and faith-based organizations that are working together to identify the most vulnerable populations and geographic areas and plan to ensure that future disasters do not leave them without resources.

“There were areas downtown during Hurricane Florence that were without power for as many as 18 days,” she said. “People lost [refrigerated] food and needed shelter. The absence of electricity can lead to lack of other services. People couldn’t charge their phones. Many didn’t have transportation and they couldn’t communicate.”

Schrader’s office is working with counterparts at the state level, Duke Energy and numerous business partners to find ways to improve the reliability of electricity to these vulnerable neighborhoods. Her office coordinates with the county Resiliency Task Force and Disaster Coalition, and she is part of the leadership of both groups.

The pandemic brought new situations and new challenges, further illustrating the need to improve services during hurricanes and other emergencies.

“We’re looking at data about the changes happening over time, ways we might minimize risk,” Schrader added. “We want to be able to have less bump and recover faster.”