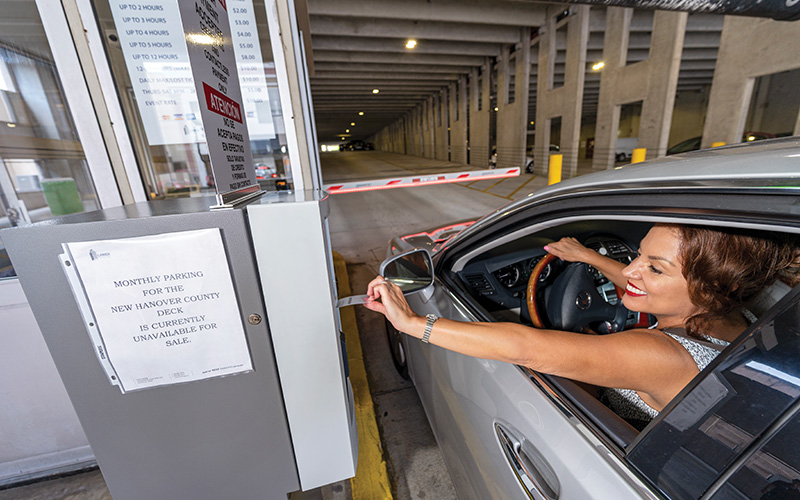 “We’ve shown it quite a bit in the past four or five months, but the one question that comes up is, ‘Where will our employees park?’” Hipp said in late July.

The amount and cost of parking in urban settings is a ubiquitous topic, particularly in growing cities like Wilmington, where not everyone agrees about whether current rates and availability are up to speed. Either way, downtown business owners and leaders agree that the city will need more parking in the future to keep up with growth.

Aiming to stay on top of the issue, Wilmington has its own parking division in the city manager’s office, Lanier Parking as its parking vendor and a nine-member Downtown Parking Advisory Committee (DPAC).

“In my viewpoint, there’s plenty of parking,” Dunbar said, noting that the city parking decks on Market and Second streets don’t fill up on a daily basis.

Speaking specifically about monthly spaces some businesses with offices downtown prefer, Hipp said, “The existing parking decks, while they’re a great benefit, they’re just not adequate because we’re allowing hotels to use some of these spaces…some are left for daily parking, and therefore, there’s fewer available for businesses to use on a monthly basis.”

Hipp’s experience has been with the New Hanover County parking deck attached to the main branch of the county’s public library. That deck offers two-hour library parking for free on the ground floor, free parking on the other floors for the first hour and up to $10 maximum for the day.

“The spaces set aside for hourly/daily vehicles don’t normally fill up unless there is a major event going on downtown or there is a large number of jury candidates summoned to the courthouse. Based on that, several times a month the lot could be full depending on what is going on and time of the year,” county officials said in an email.

In that structure, also managed by Lanier Parking, the estimated wait time to obtain a monthly parking pass is nine to 12 months, county officials said July 27, when there were 39 people on the waiting list.

The city, on the other hand, has four decks with public parking and does have some monthly passes available, in the decks at 115 Market St. and 14 Grace St. at River Place. The costs of monthly passes at those decks vary from $25 per month for unreserved rooftop spaces up to $150 a month for a reserved space in the River Place deck.

Parking isn’t a big moneymaker for the city and county, officials said.

“The revenues that we generate from all the parking fees, whether it’s on-street meters, citations, etc. – they are all collected by the city, all of it comes back to the city. We use those revenues to pay our annual budget expenses,” Dunbar said. “Any revenues in excess go back into the parking fund and are then used for items such as the Second Street deck capital rehab project.” 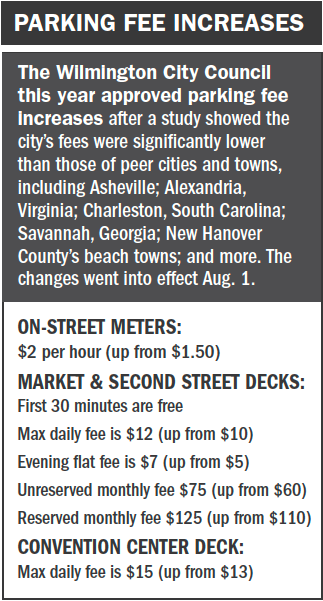 “I used to think all they want to do is raise prices and make a lot of money, and I don’t feel like that anymore,” said Justin Smith, a member of DPAC.

Smith is one of the owners of downtown restaurants YoSake, Husk, Anne Bonny’s Bar & Grill and the upcoming Prost on South Front Street.

He said Dunbar and DPAC continue to look at ways to enhance parking downtown, aiming to offer more affordable options such as the monthly, $25 unreserved rooftop rate.

“It’s a great discount,” said Smith, whose managers park in a surface lot on Second Street with monthly passes that now cost Smith $75 each per month.

He said he would like to see more transportation options, such as shuttles, for downtown and its satellites, including Castle Street and the Brooklyn Arts District, to name two.

“I think that’s the best way to have a vibrant downtown,” Smith said.

He said while he thinks there are plenty of parking spaces downtown, parking is a concern for small businesses, among other issues.

“I’m not sure that today’s downtown is perfectly conducive for every small business in America, and that doesn’t have to do just with parking; that has to do with a lot of things, but parking is one of them,” Smith said, adding that leasing rates for downtown commercial space have grown so steep, some businesses can’t afford to be there. (See page 16 for a story about the rise in commercial rents in general in the Wilmington area.)

No matter what, parking will continue to be key to growth, business and government leaders said.

“If it wasn’t for the structured parking, there would be no revitalization of downtown Wilmington,” said Wilmington Mayor Bill Saffo. “As revitalization efforts have picked up speed and steam downtown, the demand for more structured parking for development purposes has increased. Obviously, if you’re going to be bringing in more office buildings, grocery stores, apartments, condos, you’re going to need additional parking, but it’s going to be strategic as to where that parking will be placed.”

As to whether downtown’s parking situation has discouraged businesses from locating there, Saffo said, “We haven’t had any commentary or any concerns or feedback from folks that are telling us that this is killing the deal … We have not seen that as of yet or heard that as of yet, and we’re very sensitive to it.”

He said city officials feel downtown Wilmington has an ample amount of parking in place currently to “handle everything we need to handle,” including concerts at the 7,200-seat Live Oak Bank Pavilion.

But with the upcoming redevelopment of the north end of downtown, “there’s going to be some additional ask for more parking, whether it be somehow a partnership where the private sector builds it and we lease back, but we actually make the investment in that parking structure ourselves,” Saffo said.

The Northern Gateway Project is a specific example. The development, which would be a public-private partnership with East West Partners using city properties, is expected to include several buildings with housing units, structured parking and commercial facilities.

“I don’t believe we’re there yet,” Saffo said, “but I do believe that there will come a day, possibly in the very near future, where we are going to need additional parking, especially on the north end.”