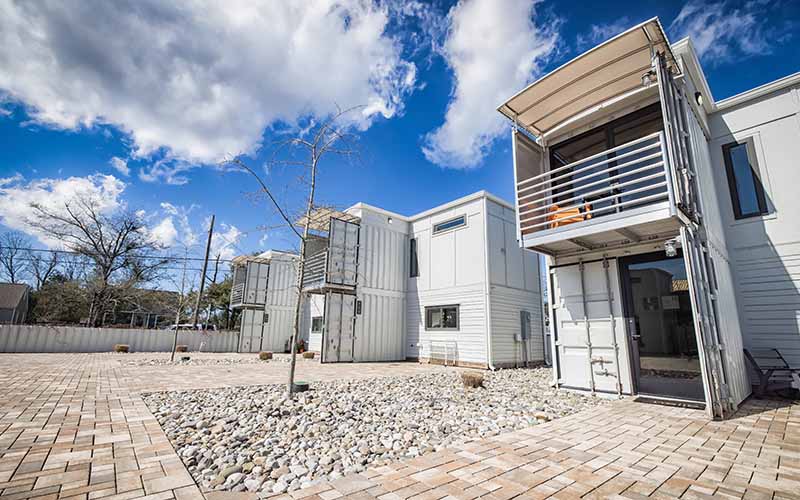 Transcend Bookkeeping & Finance outgrew its space at Coworx in the Cargo District, moving across the street to another district building in Suite 201 at 1607 Queen St.

Business partners and Transcend founders Jenna May and Thomas Bruin have watched as the Cargo District has also grown over the past couple years they’ve been there.

New businesses have been joining the district, an area that incorporates cargo containers into some of its buildings and includes parts of Queen, Castle, 15th, 16th and 17th streets.

“We’re a fairly new business ourselves so seeing that growth among the community has been invigorating,” May said. “It’s a lot of fun to have all these new people in the area. We get to collaborate a lot with all the other local businesses and see each other in passing.”

Bruin said they’re excited to see how the Cargo District continues to grow as their firm also grows; they have a team of seven and were anticipating adding an eighth employee.

“We moved from [coworking space] Coworx into our own office across the street and we actually just spoke with Leslie this morning, and as our team grows which we continue to grow we’re working with them to go into new spaces that are able to accommodate us,” Bruin said, referring to Cargo District developer Leslie Smith.

Bruin added, “I think people want to be involved with what is happening here. There’s a certain energy that exists here.”

May said the restaurant-and-bar scene in the district, which includes End of Days Distillery at 1815 Castle St., has been another advantage.

“On Fridays, we like to go out and have a drink together, so it gives a little bit of team bonding,” May said.

Sam Myer, owner of custom screen-printing business Wahoo Screen Graphix, is located at 707 S. 16th St. in a building called Design- Worx, which has nearly a dozen other tenants.

Myer came to the area in 2015, before it was widely known as the Cargo District.

“I think it’s wonderful,” Myer said of the district development. “It’s really helped the neighborhood quite a bit.”

And it’s gotten the attention of investors.

A New York investor recently bought portions of the Cargo District, and the sellers are using the funds to further develop and expand the district.

The buyer, represented by Domenico Grillo of Keller Williams, paid $1.4 million, according to property tax records.

Smith said he’s “going to turn around and reinvest the money into the area, so we purchased some more property around it that will allow us to expand the Cargo District into a couple more restaurants and possibly some other venues.”

“All these old commercial buildings that are around in disrepair, we’re going to take them and fix them,” Smith said. “That will pull people to the neighborhood.”

Cardamone, who manages Smith’s Cargo District properties, owns DesignWorx at 707 S. 16th St., housed in what was previously a warehouse that extends from 17th Street to 16th Street.

“That has 12 tenants, and they’re all small business entrepreneurs,” Cardamone said. “We’ve got a great list of innovators in that building that all have really small spaces, and they do a ton of business out of there.”

With numerous office, retail and restaurant tenants, the Cargo District has grown from Smith’s vision into a thriving reality.

Cardomone said, “It was a really quiet place for a long time, and now there’s a lot of viability there.” Smith said demolition is not in his plans.

“I have no intention of tearing anything down, only to restore what’s there and bring some new life to it and make it something that’s usable to the entire community,” he said.

As for the future use of containers in the district, Smith said, “We will try to continue the theme of incorporating containers for every project that we’re part of.”

Holiday Inn on Market Street sells for more than $10M