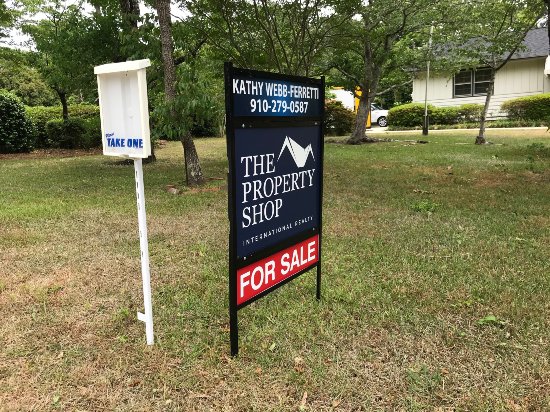 A home for sale in midtown Wilmington. Houses aren't staying on the market long in the tri-county region. (Photo by Cece Nunn)

Homes in New Hanover, Brunswick and Pender counties are selling at a historically rapid rate, according to a report released Monday by Cape Fear Realtors.

The trend is continuing to fuel multiple-offer situations for homebuyers and driving prices higher, a news release stated.

"Strong buyer demand and limited housing supply shows no signs of easing, pointing to a blazing hot summer market ahead," according to the release.

In April, the tri-county region saw a surge in new listings, pending sales and closed sales. New listings jumped 44.3% over April 2020 while closed sales rose at a similar rate of 44.2% over last year, the release stated.

Pending sales experienced the largest increase, with a nearly 85% jump compared to the previous year.

Low interest rates remain a reason behind the ongoing flurry of activity, as well as the number of homebuyers moving from other towns and states to Wilmington, said Tim Milam, president of Coldwell Banker Sea Coast Advantage, a Wilmington-based residential real estate firm.

"There’s so many people coming from outside the market into our market," Milam said. "Oftentimes, somebody will come in from another market, the Northeast or out West for example, and they are used to much higher prices and much higher taxes and sometimes it seems like they are willing to spend more money on multiple offers because it’s still considerably less than what they were paying in their previous market."

The pandemic has also played a role.

"There's no question that COVID is driving people out of the larger cities and bringing them here, much more than in the past," Milam said. "They just want to get out. They want to be in more of a rural area."

According to the release, inventory levels continue to decrease, dropping 71% in April this year compared to April 2020 to a record-low months’ supply of 0.7 for the region.

“This market is moving at lightning speed with homes receiving multiple offers within hours of entering the market,” said Tom Gale, CFR president, in the release.