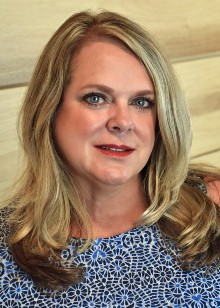 Becky Brown
The leaders of a Wilmington real estate group are taking on different roles within their organization, according to an announcement this week.

Kirk Pugh, previously broker in charge of KBT Realty Group, is shifting his focus to growing the group's services, including expanding its new commercial real estate division, according to a news release. Realtor Becky Brown, co-founder, is assuming the broker in charge role.

Pugh and Brown founded the brokerage in 2015. As broker in charge, Brown supervises the 23 licensed real estate agents within KBT Realty Group, a team affiliated with Keller Williams Innovate.

“Broker-in-charge is the highest level of real estate licensure you can reach in North Carolina, and it has been one of my career goals to earn that designation,” Brown said in the release. “As a 50%-woman-owned business, it’s exciting for me to assume the responsibilities of BIC for our team.”

Separately, Pugh has been working as a developer on plans for Battleship Point via another company, KFJ Development. The controversial Battleship Point proposal calls for a major mixed-use project - with condos, apartments and commercial space – along the Cape Fear and Northeast Cape Fear rivers, across from downtown Wilmington.

On the status of Battleship Point, which he stressed is not a KBT Realty initiative, Pugh said Thursday, "We're patiently waiting on New Hanover County to schedule their second work session" on the topic of riverfront development.

“With the addition of commercial broker Shawn Roberts to the team, and the many growth opportunities that continue to open for KBT, I see many new projects in the near future," Pugh said in the release.

Elaborating on the hiring of Roberts, formerly of Florida, Pugh said, "My goal is to help guide him to create a larger commercial presence for the team."