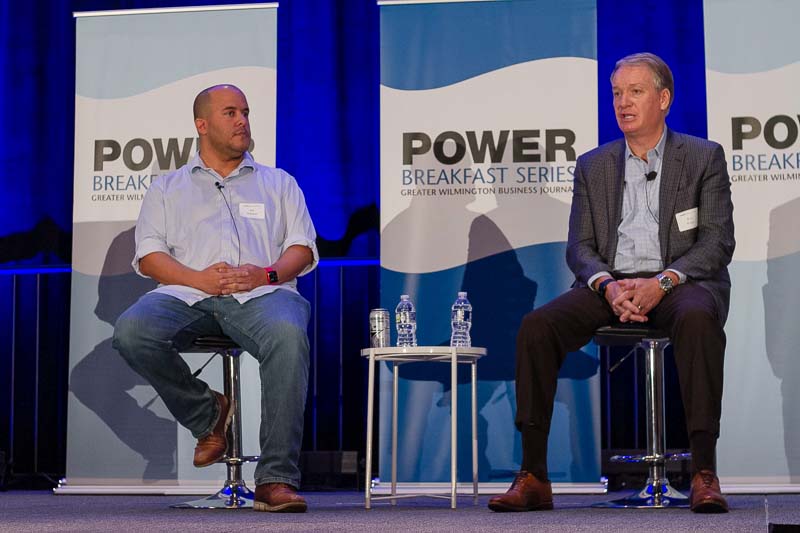 The Greater Wilmington Business Journal’s last Power Breakfast of 2021 on Tuesday highlighted the city’s “most intriguing people,” who each shared their unique vantage point on the community’s growth and needs.

A crowd listened as tech leaders reflected on the city’s ability to train and lure talent and a marine biologist emphasized the importance of planning for sea level rise. The chamber’s director highlighted the need for a new bridge, the port director outlined growth strategies and philanthropic appointees gave an overview of new Hanover County’s billion-dollar endowment.

Suzy’s chief technology officer William Mansfield – married to the reason Suzy is launching a hub in Wilmington (his wife was a fan of Dawson’s Creek, which prompted their first move to the area) – shared the company’s point-of-view.

“We disrupt,” he said. “Our personality is disruptive.”

The market research company, which provides the world’s biggest brands with analyses within days rather than months, was founded in New York City in 2018 and is opening up its first outpost in Wilmington, with plans to hire at least 40 employees. The count will likely be higher than announced, Mansfield said.

“There’s a reason we got that big 12,000-[square]-foot floor,” he said, referencing the company's third-floor lease at the old Bank of America building downtown.

Requiring senior-level tech talent, Mansfield said the company would prefer to compete with Apple for hires at the beach, rather than setting up shop next door in a larger region. “Fundamentally, we have a huge opportunity here, and really because of the neighboring regions, we can just siphon all the talent,” he said.

Mansfield contrasted Wilmington with larger regions he’s worked in, particularly southern California, where tech is ingrained in the culture. “Tech does not feel like our pulse,” he said of Wilmington.

After witnessing the economic crash in the late 2000s, with Wilmington then over-dependent on real estate, Sweyer said his push for Vantaca arose from a need for clean jobs and local diversification. He said he “networked like crazy” with other tech leaders to craft something that aligned with the community. Today, about 40% of the company’s new hires are UNCW graduates.

The company is partnering with Cape Fear Community College to design more than 700 hours of specialized training for new hires. Vantaca will add 104 people to its team and is eligible for up to $1.4 million in state economic development grant dollars if it makes good on its hiring goals over a 12-year period.

The leaders of the New Hanover Community Endowment shared their view of the path ahead, now that the nonprofit is growing its nest, currently valued at $1.29 billion.

Created by the sale of the county-owned New Hanover Regional Medical Center to Novant Health, a deal that closed in February, the endowment is undergoing a CEO search and is beginning to formulate its grantmaking criteria.

Chair Spence Broadhurst and vice-chair Hannah Gage reflected on the fact that the endowment is unlike other legacy health foundations. “We’re also finding that we think we’re a unicorn,” Broadhurst said.

The two acknowledged there were challenges ahead with narrowing down priorities and with infusing the existing nonprofit network with previously unthinkable amounts of cash.

“A lot of the nonprofits have to build the capacity to handle that much money; they may have been accustomed to asking for $50,000,” Gage said. “But handling 10 times that is more than many of them can handle responsibly and that we can oversee.”

The endowment hosted its last of two listening sessions earlier this month, which will be utilized to come up with grant criteria. Criteria is set to be publicly shared in July, and the first grants could be approved in November, but that schedule is tentative. Private businesses are not eligible for any grants, Broadhurst confirmed.

UNCW’s executive director of the Center for Marine Science, Ken Halanych, is just two months into the job. So far, the biggest issues he sees popping up in the region are water quality and flood control.

He showed an image of “ghost trees” to the audience, which are dead riverfront bald cypress, abundant in the Cape Fear region due to saltwater intrusion. Saltwater intrusion is caused by sea level rise and channel deepening.

Halanych also displayed a rendering of swaths of the region under water in the coming decades and cited the need to plan ahead. “To me, the Blue Economy is not just growing business but it’s doing it in a smart and sustainable fashion,” he said.

He cited the latest federal effort to lease thousands of acres off Southeastern North Carolina for wind turbines as a familiar controversy, one he experienced decades ago in Massachusetts.

“The windmill farms, they’re going to happen,” he said. “The question is, will we position ourselves to be ready to take advantage of them and work with them and build businesses and institutions around them?

The N.C. State Ports Authority is preparing for a year of growth in 2022, bolstered by a new rail service and planned expansions of its privately and publicly funded cold storage facilities.

As supply chain disruptions peak, the ports authority hopes its years of preparation will pay off. Executive director Brian Clark said the ports authority is vying for a new carrier service, aiming to capture lines dealing with congestion at higher traffic ports.

Backing from public partners in the past several years, helping to fund a $221 million investment plan nearing completion, has allowed the state ports to be “on par” with its competition, Clark said.

“It is a very competitive industry, trying to attract volumes and grow our business,” he said.

He highlighted the new Midwest Express and the “critical” need for the conditionally approved harbor deepening project, which is still years in the works.

For at least the second time this month, Wilmington Chamber of Commerce CEO Natalie English took her opportunity in front of an audience to drive home a point: The city needs a new bridge.

English speckled her presentation, which focused on recovery from Hurricane Florence and the pandemic, with photos of the Cape Fear Memorial Bridge, urging leaders to find a solution to replacing the New Hanover-Brunswick County connection.

“If we don't get together and figure out how we solve that issue, we will be behind,” she said.